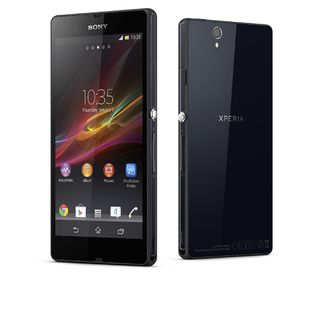 The Xperia Z features a 5in, Full HD (1920x1080) 'Reality' display, 13MP camera and is powered by a 1.5GHz asychronous quad-core processor. Thickness is a waif-like 7.9mm and the phone's chassis is made using tempered glass with an anti-shatter film on front and back.

The phone will ship Android 4.1 (aka Jelly Bean), with Sony promising to upgrade to Android version 4.2 shortly after launch. It's also 4G LTE-enabled so will be ready to roll on high-speed mobile networks when it launches in Feb/March.

Sony claims the handset's 'Stamina' mode, can extend battery life by four times in standby mode. It does this by shutting down apps when put in standby and booting them back up when the phone's fired up.

The Xperia Z also incorporates NFC (Near Filed Communication) technology, which means when the phone is partnered with compatible Sony products, such as headphones, portable speakers, systems or televisions, you can stream content from the handset to the device using Wi-Fi Direct.