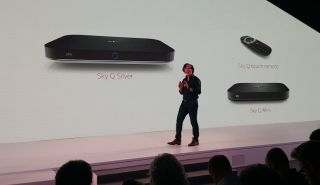 The box is Ultra HD compatible, with Sky promising to launch "the UK’s most comprehensive Ultra High Definition service later in 2016".

The main Sky Q box has a whopping 12 TV tuners and is capable of recording four programmes at once. The main Sky Q box is the powerhouse of the system, which can then feed a maximum of two Sky Q mini boxes in two other rooms. Each box is also a WiFi hotspot, boosting your network around your home.

You can watch on up to three TVs and two tablets at once - and it's the first time that Sky has allowed you to watch recorded content from your box on a tablet.

The new boxes also include AirPlay and Bluetooth for streaming music from a phone, tablet or computer. There's no support for video over AirPlay, however.

A new Sky Q app makes this possible, launching on iOS and Android tablets at first, with a smartphone app set to launch later in 2016. The Sky Q mini box too, the company's first wireless box, streams recorded content wirelessly from your main box and has access to on demand programmes.

MORE: Sky Q - everything you need to know

The platform aims to deliver a "fluid" TV viewing experience, allowing you to watch recorded programmes and Sky content across multiple devices, in the home and in the go, including your recording programmes on a tablet.

The service launches with a brand new interface, which marries live and on demand content, and will offer content recommendations based on your viewing habits. There are apps too, such as Vevo and YouTube, plus editorial content from the likes of Wired.

Sky Q is a whole new platform for Sky and as a result, it won't work with existing Sky+ boxes. While Sky says it's always working on improvements to its service, it's unlikely the new interface will come to Sky+ HD boxes either.

There's a new remote for the Q system, with a touch interface promising to make browsing content easier and faster.

Sky Q will launch in early 2016, with pricing and further details on 4K channels to be confirmed nearer the time.

"It's time to set your TV free" was the teaser video, and while Ultra HD was part of the announcement, it was the wireless, fluid viewing aspect of the new Q platform that took centre stage.

Rumours around a Sky 4K box had circulated for some time, with BT having beaten Sky to the jump earlier this year with a 4K box to accompany the launch of its BT Sport Ultra HD channel.

Sky established 'Project Ethan' to work on 4K TV back in 2014. Earlier this year it had been suggested Sky Q was the company's plan to deliver a Netflix-style interface, blending live and on-demand content, and the rumours were true.

The ability to watch content recorded to your Sky box on your mobile or tablet was long-rumoured and this finally arrived with Sky Q, as did the ability to stream different programmes to different sceens, all from the same box and Sky account. Another popular upgrade request was for more tuners - Virgin offers three tuners in its TiVo box as opposed to Sky's two - and Sky took a giant leap to a massive 12 tuners in the main Sky Q box.

There's no word on pricing - we wouldn't expect these boxes or the new Q service to be cheap - but Sky promised more information ahead of the launch in "early 2016".