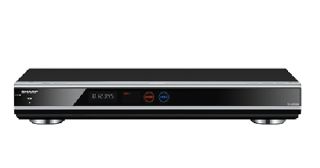 A device that records native 4K TV broadcasts? It might seem premature to unveil such a product here in the UK, but Sharp's new Aquos TU-UD1000 goes on sale in Japan on June 25th.

With the Japanese preparing to trial 4K TV broadcasts next month, the electronics company clearly believes now is the right time to launch its new 1TB recording and playback unit.

Under its cover, the new unit will have a 1TB hard disk able to store about 53 hours of 4K content, once the trial broadcasts begin. Japan has already trialled 4K TV internet streaming too.

Sharp has used the ViXS XCode 6400 System on Chip to power the new 4K recorder – one of the first consumer products with a built-in 4K HEV Decoder to record and receive 4K signals.

MORE: Read all our TV reviews

A Sharp spokesperson was quoted as describing the Aquos TU-UD1000 as 'the industry's first 4K recorder with a 4K receiver function' and stated the company's desire to 'go ahead of the pack'.

In addition to the recorder, three new LCD 4K TVs are to be launched by Sharp in 52-, 60- and 72-in sizes. The TVs will need the new receiver to view and record satellite 4K programmes.

Trial 4K broadcasts will be carried out by a consortium called the Next Generation Television and Broadcasting Promotion Forum from June 2nd, with 8K also on the Japanese horizon.

Sony, meanwhile, has teamed up with FIFA to provide 4K coverage of three matches at the World Cup and NTT Plala is planning to launch a new 4K video-on-demand service in October.

MORE: How to watch the 2014 World Cup on TV and online