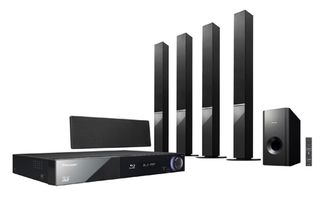 Pioneer has unleashed a quartet of Blu-ray home cinema systems, two with iPod/iPhone connectivity and wi-fi, and two without.

A mini jack audio connector, for portable music players, and a USB connector are also standard across the ranges.

Power output on all models is 5 x 180W, plus 200W for the subwoofer. There's onboard decoding for Dolby TrueHD and DTS-HD Master Audio, support for DivX, DivX HD and MKV video files, and they will play WMA, MP3 and AAC audio.