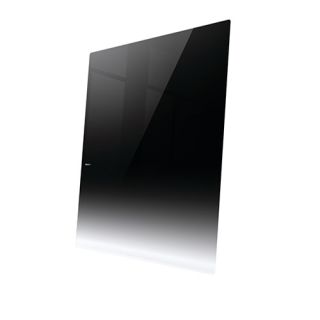 TV manufacturers could be forgiven for thinking consumers all want the same thing from a new TV: maximum screen, mininum bezel and a stand to stand it on. Philips, though, wants to offer a genuine alternative – and today has announced the DesignLine PDL-8908.

As is apparent from the pictures, the DesignLine TV is unconventional in the extreme. The front of the TV is one seamless, square sheet of glass in 'gradient' black – the aim is to create an impression of lightness and transparency. Consequently this is a television without stand or visible frame, one that (when it's turned off) appears to be a smooth sheet of glass (one that flows from opaque to transparent) leaning against a wall.

Switch it on, and the top half of that big sheet of glass is revealed to be a 46in or 55in TV. Three-sided Ambilight XL only adds to the 'floating' impression by projecting light that matches the colour of the on-screen content onto the wall behind.

Wi-Fi is integrated, connectivity is plentiful, remote control is handled via keyboard and pointer, and there's a provision for two-player full-screen gaming.