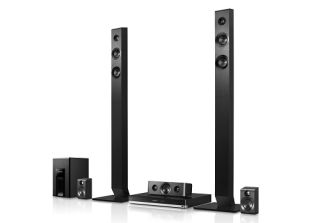 Panasonic has announced five new ‘home cinema in a box’ systems for 2014, three of which offer 4K upscaling and all featuring a range of smart networking features.

Admittedly each system comes with just five physical speakers (the rear speakers are wireless on the SC-BTT885 and SC-BTT865) plus a subwoofer, giving a much more prosaic 5.1 configuration – but thanks to some witheringly complicated sound processing, Panasonic is claiming the existence of 31 ‘virtual’ speakers. Of the two 3D-but-no-4K systems, the SC-BTT465 is a 5.1 affair while the SC-BTT105 arrives in 2.1 configuration.

The 4K models are powered by the new LincsD amplification, and all feature a bass-reflex subwoofer with 20cm driver. And with 4K upscaling included you can be sure that, if you’ve shelled out for one of Panasonic’s new 2014 4K Ultra HD TVs, your cinema system is ready to fill your screen with information. In addition, all three systems feature built-in wi-fi.

All three of these systems also feature Panasonic’s much-improved Smart functionality, including the company’s proprietary Music Streaming feature. With the Music Streaming app in place, the user can either use aptX Bluetooth to stream wirelessly from smartphone or tablet, or can stream from network-attached storage.

And video content is handled by Miracast – wirelessly connect your Android device (OS 4.2 or better) to push video to any of these new Panasonic home theatre systems.

The two 3D systems both feature NFC Bluetooth capability, and both can be wi-fi enabled with the addition of a dongle. The SC-BTT465 supposedly delivers 1000 watts of power through its six channels, while the SC-BTT105 has to scrape by with 300 across its 3.

Meanwhile, Panasonic’s not alone in fancying a slice of the multi-room wireless music pie, and today it’s announced two new wireless speaker systems and a network audio connector in an attempt to snatch a piece of the action.

Using either iOS or Android smartphone or tablet it’s possible to build a multi-room system on an existing wi-fi network. System control is via the app of a music subscription or internet radio service.

There’s plenty of flexibility in configuration: the SC-ALL8 can be wall-mounted, while the SC-ALL3 and SH-ALL1C can be deployed either vertically or horizontally. The 80-watt SC-ALL8 features 5 speakers (two tweeters, two mid/bass drivers and a subwoofer), with the 12cm woofer and both tweeters being made of bamboo. The 40-watt SC-ALL3 forgoes the subwoofer.

Both wireless speaker systems feature Panasonic’s LincsD amplification (which the company demonstrably has high hopes for). There are a number of noise-shaping technologies at work, aimed at reducing jitter and delivering the sort of bass (80Hz or lower) that’s pretty unlikely in products of this size.

More pertinent, perhaps, is the 24bit/192kHz Burr Brown DAC fitted to the SH-ALL1C network audio connector: this promises to deliver high-quality audio from any existing system.

Rather more traditional are the two compact music systems (SC-HC29 and SC-HC19) also announced. The SC-HC29 is a 20-watt, Bluetooth-enabled wall-mountable system with MP3 playback via USB, while the SC-HC19 does without Bluetooth connectivity.

MORE: Sonos wireless speakers - everything you need to know