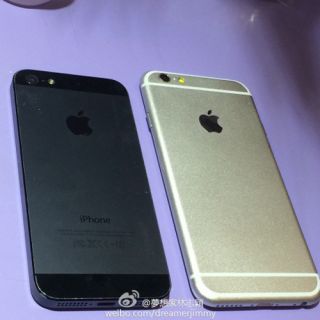 It's not the first time that Lin has taken the wraps off a new Apple device, having leaked accurate snaps of the iPhone 5 and iPad Mini before their respective launches.

In the images, the alleged iPhone 6 appears next to an iPhone 5S and it's clear that the iPhone 6 has a much larger screen, cementing rumours of a 4.8in screen.

What's also apparent from the images is that the new iPhone features a curvier design compared to its predecessor and looks more reminiscent of the iPhone 3G and 3G S.

The new handset also appears to be thinner than the iPhone 5S and features an all-metal, unibody design, similar to the HTC One M8.

The alleged iPhone 6 is shown to be sporting a 3.5mm headphone port as well as Apple's Lightning connector. It was recently confirmed that Apple will allow third party manufacturers to make headphones that connect via the Lightning port, thus eradicating the need for a 3.5mm connection.

Previous leaked images of the upcoming iPhone 6 appeared online over a month ago. These too showed a much larger look for the new smartphone.

It's unclear from the latest photos, however, whether Apple has used a solar power and sapphire glass screen, as previous rumours have suggested.

With just a few months left to wait until the likely launch of the new iPhone 6, no doubt we can start to expect more details and images to emerge soon.