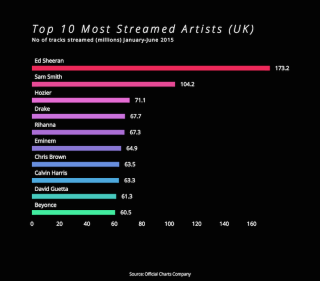 According to the latest figures from the Official Charts Company, the launch of Apple Music - combined with the likes of Spotify, Deezer and Tidal - has resulted in a record 505,849,000 streams for the week ending 16th July 2015.

That's almost double the amount for the same period in 2014, when streaming averaged 275 million songs per week - a total of 14.8 billion a year.

The total number of tracks streamed is up 80 per cent in the first half of 2015 to 11.5 billion. If that rate of growth continues, the Official Chart Company reckons the total number of audio streams will top 25 billion by the end of 2015.

Geoff Taylor, chief executive of the BPI and BRIT Awards, says: "It is remarkable that we now speak of billions of audio streams a month - it demonstrates vividly just how quickly music streaming is being embraced by British music fans."