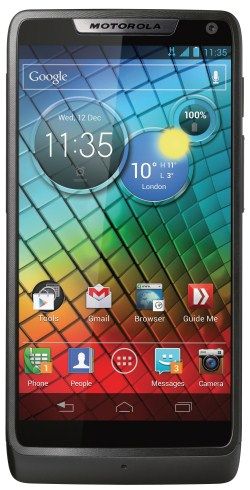 Motorola has today launched the latest version of its RAZR series of smartphones, the RAZR i.

Sporting a 4.3in screen, the phone is billed as "the full-screen phone" thanks to a SUPER Amoled "edge-to-edge" screen with virtually no border.

Launched in conjunction with Intel, the Intel Atom processor promises fastest-ever smartphone processing speeds of up to 2Ghz for faster browsing, gaming and multi-tasking.

The Android phone launches with Android 4.0 (4.0.4.) but promises an upgrade to Jelly Bean in the near future.

Unlike the iPhone 5, the RAZR i is NFC and DLNA compatible for wireless transfers and also has access to the Google Play Store for apps, movies, books and more.

There's even a handy one-touch button for starting the camera in double-quick - Intel Atom quick - time.

There's a micro USB connection and an SD card for expanding the memory, too, though sadly no sign of support for 4G.

Due out in October and available in black and white, the Motorola RAZR i will be on Orange, T-Mobile and Tesco Mobile.