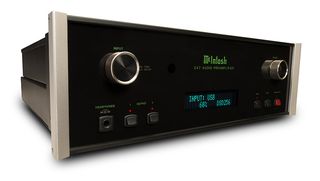 DSD65, DSD128 and DSD256 high-resolution audio formats are supported over USB, along with DXD 352.8kHz. The two optical and single coaxial inputs are capable of decoding up to 24-bit/192kHz audio.

McIntosh says the C47 can directly connect to its MCT450 SACD/CD transport via the MCT input, to create a “secure, custom DSD connection” for optimum SACD (Super Audio CD) playback.

Analogue sources are catered for too thanks to the inclusion of two balanced and three unbalanced inputs, as well as MC and MM phono inputs.

The C47 also offers bass and treble tone controls for all inputs for custom tuning, and a Home Theatre Pass Through feature allows the preamp to be integrated into multi-channel home cinema systems.

And it wouldn’t be a McIntosh product without the brand’s signature black glass front panel, illuminated logos and brushed-aluminium end caps.

The McIntosh C47 will be available in the UK in late October/early November for £3995.