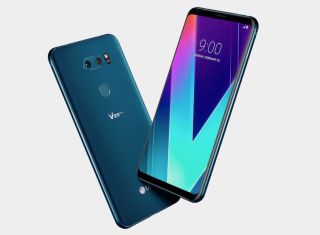 It’s not even been six months, and LG has already announced a successor to its V30 smartphone, the LG V30S ThinQ.

The original got a four-star thumbs up from us, mostly for its high-res audio performance and MQA support - but this new version comes with a few subtle tweaks that aim to keep it competitive in 2018.

Embracing the ThinQ branding unveiled at CES 2018, the V30S' biggest changes come in the form of new artificial intelligence features, which aim to improve some of the phone’s most commonly used features.

The biggest of these is the camera which, although has the same 16/13MP dual-camera setup on the rear, now comes with an intelligent camera mode that can select a scene mode based on what you’re taking a picture of.

The QLens feature takes further advantage of these image recognition capabilities by offering you the ability to snap pictures and get information related to it – where you can buy something similar or information on a landmark, for example.

Low light photography also gets an AI boost with the so-called Bright Mode. Instead of measuring only the ambient light like most cameras, the AI functionality uses a whole host of algorithms to assess the scene in more detail, and promises images up to two times brighter without noise.

However, it’s not just the camera that gets a lick of AI. LG’s V30S ThinQ also gets new voice controls, allowing users to launch apps and change settings using only their voice.

Working alongside the built-in Google Assistant, LG’s Voice AI negates the need to trawl through menus to make tweaks and changes, with more to come from this as the feature is developed.

Elsewhere, the big things stay largely the same. The 6in AMOLED display (with 18:9 screen ratio and 2880 x 1440 resolution) remains unchanged, as does the audio spec (with 32-bit Advanced Hi-Fi Quad DAC tuned by B&O Play).

While the LG V30S also sticks with Qualcomm’s Snapdragon 835 processor from last year, it does get a RAM upgrade to 6GB (from 4GB) and a storage lift from 128GB to 256GB. Of course, the microSD card slot is still available for extra storage too, should you need it.

The V30S ThinQ has no release date or price at the moment, but we’d expect it to show its face on your upgrade lists by March or April. So watch this space.

Could Apple launch its own branded headphones this year?