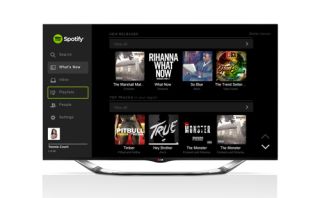 LG is adding music streaming service Spotify to its range of smart TVs. The app will give owners of all 2013 model LG smart TVs access to more than 20 million songs. But they will need to have a Spotify Premium account, which costs £9.99 a month.

"Spotify is a welcome addition to the growing selection of premium content accessible on our smart TVs," says Richard Choi, senior vice president of the Smart Business Centre at LG.

Spotify will be available on LG smart TVs from mid-December in 30 markets including the UK, US, France, Germany, Spain, Italy, Nordics, Benelux and Mexico.

However, a Spotify spokesman confirmed to whathifi.com that users wishing to use Spotify on products such as Sonos, Samsung TVs, the Now TV Box and compatible AV receivers, will still need to subscribe to the Premium service.