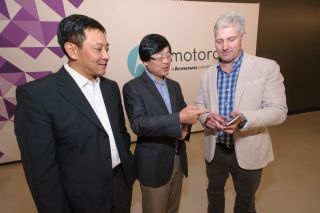 We first had confirmation that Lenovo had moved to purchase the Motorola brand and its portfolio of smartphones such as the Moto X and Moto G back in January, with the deal worth $2.91bn.

The deal also signals the end of what seemed like a whirlwind association between Motorola and Google, with the US internet giant paying $12.5bn for the mobile manufacturer in May 2012.

It's believed the agreement will see Google net $660m in cash; $750m in Lenovo shares; and the final $1.5bn paid in a three-year promise. Google will, however, retain many of Motorola's patents.

Now the deal has been completed, China-based Lenovo said it will operate Motorola as a wholly-owned subsidiary headquartered in Chicago. All 3,500 Motorola employees will transfer over too.

The plan is for Lenovo to become a "credible challenger to the top two in smartphones", offering a greater choice to consumers and encouraging further innovation when it comes to mobile devices.

Liu Jun said: "Motorola has already built solid momentum in the market, and their recent results show consumers are excited about their exceptional products that stand out for their design and simplicity.

He added that Lenovo expects to sell 100 million mobile devices this year by taking advantage of its market position in China, Motorola's US foothold and "shared momentum in emerging markets".