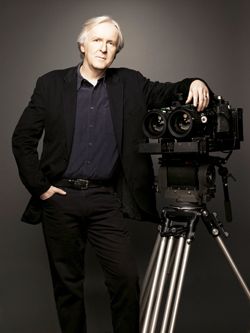 The director of Titanic and Avatar has a vision of all entertainment being in 3D, and pretty soon – but sorry, Panasonic, it doesn't involve active-shutter TV technology...

It's hard not to think of James Cameron standing on the prow of the RMS Hollywood, shouting 'I'm the king of the 3D world!'.

After all, the director of Titanic and Avatar has just announced an alliance with long-time collaborator Vince Pace, to make 3D technology available to film and TV producers and accelerate the uptake of 3D across movies and broadcast.

And he's predicting an all-3D future, probably sooner than you think.

Not content with forming the Cameron Pace Group as a one-stop hardware shop for 3D production, Cameron's also predicting that within five years everything will be made in 3D, and those of us resolutely sticking to what we now consider to be conventional TV will be watching what can only be described as downconverted 3D.

Or at least one eye's worth of output from an all-3D production chain.

The heart of the Cameron Pace offering will be the Fusion 3D system, which starts with the company's 3D camera (above) and Mobile Workflow Units and forms 'end-to-end solutions for both the live and recorded production environments', according to co-founder Vince Pace, seen below left with Cameron.

Its mission, he says, is 'to step up industry-wide efforts to help filmmakers realize 3D’s full potential as a creative and powerful storytelling medium and accelerate the growth of the next generation of 3D solutions across all platforms.'

To this end, CPG has already announced an alliance with camera manufacturer Arri to develop its lightweight Alexa M camera system (above), weighing around 2kg and due to be available early next year, for 3D use.

The Alexa M has all its electronics offboard, connected to the lens and sensor by fibre-optic cable, to keep the business end light and very portable.

And Cameron adds that 'Our goal is to banish all the perceived and actual barriers to entry that are currently holding back producers, studios and networks from embracing their 3D future.

'We are dedicated to building a global brand that is synonymous with high quality 3D and spans multiple channels, from features to episodic television, and changes the boundaries of what is understood to be 3D material.'

The two made the announcement of the new company at last week's annual convention of America's National Association of Broadcasters, where Cameron was also forthcoming about his vision of the future of 3D TV in the home.

Everything in 3D in five years

He said that he could see a situation within about five years 'where everything is in 3D and people demand 3D the way people used to demand colour, and if you're not broadcasting in 3D you're not playing the game, and you're not getting any revenue.'

He also predicted that, in order to achieve greater consumer uptake of 3D TVs, sets will soon drop active shutter glasses in favour of inexpensive polarised passive specs, and that 3D TVs without glasses will be available as consumer products within the five year timeframe he's set for 3D world domination.

After all, the company has been using Cameron's Avatar to promote its 3D TVs since 2009, and is thought to have an exclusive lock-in of the 3D Blu-ray of the movie as a promotional tool for its TVs and Blu-ray systems through into next year.

Not to mention the fact that it recently invited journalists from all over Europe to Japan, in no small part to extol to them the superiority of its frame-sequential active shutter 3D system over passive and glasses-free technology.

While we were there, we had a 3D demonstration of Avatar – what else? – on the company's massive 152in plasma TV.

Mind you, Panasonic may have had an inkling that its involvement was only a small part of the Cameron masterplan when the director appeared in New York's Times Square back in November, filming an unannounced Black Eyed Peas concert in 3D.

Full steam ahead for Pirates, Transformers and a 3D Titanic

Cameron, meanwhile, forges on: Cameron Pace Group technology is being used for forthcoming movies including Pirates of the Caribbean: On Stranger Tides, Transformers: Dark of the Moon and Final Destination 5, while a 3D version of Titanic is expected early next year to mark the centenary of the sinking of the liner on April 15, 1912.

This will be from the director who said of converting films conventionally into 3D that 'It's never going to be as good as if you shot it in 3D, but think of it as sort of 2.8D.'

But a word of caution regarding the way 3D may be going: in Hong Kong, 3D flagship Avatar has just had its record-breaking opening-day box office takings blown out of the water by a new 3D release, which has had people flocking to the cinemas for a new taste of things bursting out of the screen at them.