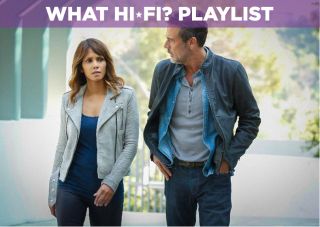 The first series was a decent offering with a lacklustre mystery that never really got going. Watching the first episode of the new series, Change Scenario, that feeling still persists.

All the talk beforehand has been about how series two functions as a 'soft reboot'. Change Scenario does indeed pick up the pieces, tie up some loose ends from the first season and gets rid of a few characters too.

From its very first shot, there is a hint that Change Scenario has sufficiently upped the stakes. Telling the story from two timeframes, the opener sees Molly in a mental institution leaving the viewer with no idea as to why she’s there. It then travels back to after the first series ended with Molly in front of a committee testifying about the events that saw her go into space and destroy the alien spores.

She lies under oath, which is odd, considering she spent most of the first series railing against lies and cover ups. David Morrissey's US Army General Tobias Shephard helps quash any talk of an alien invasion, keeping quiet that her offspring from the first series made it onto Earth but died shortly after.

That’s not the only problem Molly has on her plate. Her husband John (Goran Visnjic) admits he had an affair with assistant Julie (Grace Gummer) and if that's not enough, her android 'son' Ethan (Pierce Gagnon) – resurrected after sacrificing himself in last season's finale – is taken by Homeland Security when he's seen as a threat to the nation.

Molly suffers an apparent mental breakdown and she’s committed to an institution against her will. When she hears of pregnant women dying in suspicious circumstances, she recognises the wounds as being the same as the one inflicted on fellow astronaut Kelly Sparks (Tessa Ferrer). The aliens have made their way to Earth and Molly needs the help of Jeffrey Dean Morgan’s cop/bounty hunter JD Richter to get her out of the institution and track whatever’s killing the women.

As an opening episode Change Scenario is more of a slow build, low on excitement as it sets up the plot for forthcoming episodes. This makes it feel mechanical and a little dour. There’s enough plot to keep it ticking over but as a first episode of a weekly series (Extant won’t be available all at once) it’s a mildly diverting opener at best, ineffectual at worst.

Of the new cast members, Jeffrey Dean Morgan comes off the best, his roguish charm having an instant impact. Morrissey only has two scenes, but manages to exert his gruff authority in this time.

As a show, Extant seems to content to settle for being middling and Change Scenario didn't whet our appetite for what's to come. If the mystery can find its footing and integrate better with the show's other elements – an issue we had with the first series – then it could get better. Maybe.

First impressions are of a competent start, but Extant feels like it's unsure of how to realise its full potential. Eventually it'll need to find some personality, though. Without it, it's in danger of becoming forgettable.