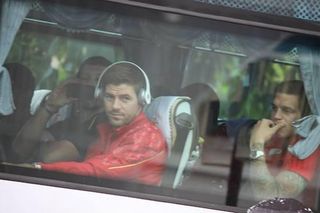 This week came the confirmation that Apple is to purchase Beats Music and Beats Electronics for a sizeable $3bn. With this deal comes ownership of the firm that produces the ever-recognisable Beats by Dre headphones.

A stylish, if ostentatious design coupled with celebrity endorsement quickly proved as popular with teenagers as celebrities, helping Beats to sell headphones by the bucketload, and helping the company to pull in $1.3 million in 2013.

Whatever the reasons for Apple's acquisition, the company is all too aware of this appeal, with CEO Tim Cook stating: "Beats Electronics has become the brand of choice for headphones and speakers in both the music and sports world, just five years after its launch."

But is this really the case? With the World Cup around the corner, we take a look at what some of the best players in the world (and Ashley Young) do with their ears when they're not focusing on their feet, to see how Apple's claim holds up...

We'll start with the man who'll be wearing number one this summer (centre), seen here at the last major tournament featuring England – Euro 2012. The choice of cans? The iT7x headphones, the brainchild of former Premier League footballer, Ian Taylor...

England's talismanic forward has been seen wearing Beats over his head, before also moving to the iT7xs at Euro 2012. But here we find him showing off a nifty pair of reclaimed wood LSTN headphones – complete with name and number. Ears for hire?

In the Brazilian heat, no defence will want to face a speedster such as Alex Oxlade-Chamberlain. These MVP Carbon by EA Sports White cans came about thanks to a partnership between Monster and, yep, EA Sports. Monster was of course the company behind the launch of the first Beats by Dre range...

If on-ear headphones aren't your thing, you could settle for the simple, straightforward approach like Leighton Baines here. We're going to give Leighton the benefit of the doubt and suggest these are at least the Apple EarPod buds and not the freebie ones...

Liverpool slipped-up at the final hurdle in their quest for their first Premier League title so the Red contingent travelling out with England will be hoping to go one step further. And it does look as if Beats is the choice for Gerrard, with what looks like a pair of Beats Solo HD cans...

... and it's the same for Glen Johnson, albeit he has his customised, something Beats are clearly only too happy to do for their higher profile clients...

But its not just the Liverpool contingent packing their Beats this summer. It looks as if Arsenal's Jack Wilshere will have his for the tournament, judging by this Twitter snap with French colleague Olivier Giroud.

But what about the Ashleys?

Neither Ashley Young nor Ashley Cole will be travelling out to the World Cup in Brazil this summer. We're sure Roy Hodgson had his reasons; were these Streets by 50 Cent headphones from Euro 2012 a factor? Surely not...

MORE: 50 Cent launches headphones – and takes a pop at Beats by Dre

England's first opponents at this summer's World Cup are Italy on June 14th, with Mario Balotelli needing no encouragement to become the centre of attention. Particularly with these fetching B&O H6 headphones...

Meanwhile, Skullcandy has snapped up Brazil's defensive general and skipper Thiago Silva as its inaugural footballing brand ambassador. No doubt these samba-tastic cans had an impact on his decision, though if our previous reviews are anything to go by, the sound may not be up to standard...

Barcelona forward Neymar doesn't seem to be following his Brazilian skipper's lead,. and anything that Skullcandy can do, it looks like Beats will match them.

Now we've seen Dutch winger Arjen Robben sporting a number of headphones over a few seasons now, but these seem to be his latest choice – at least, they were when he turned out for Bayern Munich in the German Cup final. And it's another vote for B&O H6.

He won the Premier League with Manchester City this season, but now Samir Nasri (on the left) is hoping to guide France to a first World Cup title since 1998 – with the help of these Sennheiser HD25-1 Adidas Originals?

Don't cry for me Argentina

Lionel Messi has won countless accolades as a player and trophies at Barcelona, but the big one for his country has – so far – eluded him. We assume he's upgraded from a pair of Apple earphones since starting out...

Spain come to Brazil this summer with the trophy and they'll be wanting to return with it come the middle of July. It was this fella Iniesta who won it for them in South Africa; can he do it once again in Rio de Janeiro? Spotter's badge if you can name those cans...

Ah, the Germans. Metronomic with penalty kicks, devastating with high-tempo counter attacks; but how do they fare in the headphone department. If Bastian Schweinsteiger is our guide, it seems that Beats is indeed the product of choice.

Many pundits rate this year's Belgium squad as their best yet, with players like Fellaini, Courtois, Lukaku and Vertonghen. But that's not to leave out Eden Hazard, although a dog is not our ideal accessory for our headphones, which look like another tick for Beats from where we're sitting...

Of course, it'll be almost impossible to miss Portugal's Cristiano Ronaldo and his great talent this summer. He may even keep his shirt on. It's equally as impossible to ignore his Beats cans.

It's interesting to note that Cristiano doesn't wear the headphones his official museum sells, though...

Our entirley unscientific findings? Beats certainly do seem to rule the roost in the football world, certainly amongst the England players, thanks in no small part to custom designs and that famous Beats logo.

And are Beats headphones any good? The popular opinion in audio circles seems to be 'no'. And we're inclined to agree.

While the original Monster Beats by Dre headphones received four- (Pro) and even five-star (Powerbeats) reviews, the latest models are three-star, average performers (Beats by Dre Wireless) when it comes to our performance per pound review criteria. Still, if you like the style and design, then who are we to argue...

So, what does former England boss Kevin Keegan think?