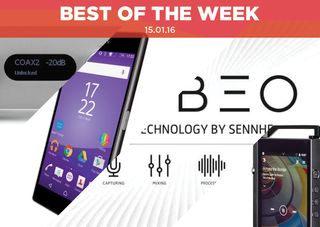 This week Sennheiser revealed its plans for the future of sound with its Ambeo 3D audio technology and Audiolab took the wraps off its M-DAC+.

On the reviews front, we had a look at a hi-res download service in Technics Tracks, Sony's latest flagship phone, the Xperia Z5 and Pioneer's first hi-res portable player in the XDP-100R.

MORE: Watch trailers for the biggest and best new films coming in 2016

Sennhesier has turned its attention to immersive audio with the launch of Ambeo.

Ambeo is a 3D audio capture and reproduction technology that, like Dolby Atmos and DTS:X, aims to envelop the listener in a surround sound experience.

Little else is known about it, but Sennheiser believes it could potentially affect how we listen to sound in music, gaming and cinema, with efforts being made to introduce this technology into future products and applications.

Audiolab is upgrading its award-winning M-DAC with the introduction of the M-DAC+.

Not all the changes are under the hood, with a new remote control and a redesigned front end making the M-DAC+ cosmetically a little different from its predecessor.

iPhone 7 "will drop headphone jack" in favour of Lightning connection

Stream your vinyl with this wireless Audio-Technica turntable

Vestax brand to return with new turntable, mixer and amplifiers

Technics relaunched its hi-fi range not too long ago but it's also been working in other areas; namely its hi-res download service.

It's not entirely its own service as it shares several traits with 7digital, but the partnership reaps benefits, with purchases on 7digital showing up in your Technics account.

With its neat, easy to use website and vast catalogue with an excellent focus on hi-fi, this is a superb place to visit for hi-res music.

Having released the fantastic Z3 and replaced it with the Z3+, Sony has waved a dismissive hand towards convention and called its latest flagship the Z5.

Surprisingly, there hasn't been much progress, with the Z5 offering little in the way of the innovation we'd expect from Sony.

Picture quality and design arguably haven't progressed since the Z3. And while its battery life and camera impress, the Z5 feels like a re-run rather than a confident step forward. A good effort but not Sony's best.

Pioneer's first portable music player is also the first to support MQA. But you'll have to wait a little longer to use that feature.

In the meantime you'll have to be content with MP3, FLAC, WAV, AIFF and DSD files, and with storage capability of up to 432GB - space for a lot of music.

The XDP-100R sounds smooth and even too, and though it lacks the precision of its rivals it's a comfortable listen.

For £500 this is a portable hi-res player that ticks all the right boxes.