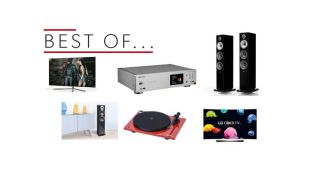 This week, Pro-Ject introduced its feature-packed FlexiRange of turntables, Cabasse's Murano Alto speaker packs in technology from its flagship (and much more expensive) hi-fi speakers and LG's premium TVs are set to receive a lossless audio update in the form of Dolby's TrueHD codec.

There was also a new What Hi-Fi? magazine issue, as the December issue hits local newsagents, iOS, Android and Kindle devices.

And it's a special issue, dedicated to the very best high-end kit. Whether it's turntables, hi-fi speakers or stereo amps, you'll find plenty of pricey pieces of kit to salivate over.

Pro-Ject is to launch a new range of turntables, based on its Essential III.

The company is producing five new models under the name 'Essential III FlexiRange'. Each turntable differs in terms of features, but all five have high-gloss MDF plinths and platters, decoupling feel, aluminium tonearms and Ortofon OM 10 cartridges.

The five models go on sale at the end of October. To read more about each turntable's features, click the link below.

The idea behind Cabasse's Murano Alto floorstanders is to incorporate technology from its flagship L'Ocean and La Sphere speakers into a more compact and affordable package.

They boast the BC13 tweeter/midrange driver from the L'Ocean, alongside a miniaturised version of the 55cm honeycomb membrane woofers in the La Spheres.

The Murano Altos are available in three finishes, and priced £8000 per pair.

LG's OLEDs were the first to implement Dolby Atmos, and now they're rolling out Dolby's TrueHD lossless audio format too.

That means that content with TrueHD soundtracks can be played through the TV's speakers without having to be passed through an AV amp.

This firmware update will shortly be available for LG's flagship TVs.

Alien earbuds: out of this world true wireless sound for tight budgets?

From CRT to VHS: the tech that got left behind

The holy grail of vinyl: the art of half-speed mastering

B&W's 704 S2s are packed full of clever technology, and exude a sense of composure and superb clarity in the midrange.

However, they sound a little lifeless at low volumes and, in terms of rhythm and bass, don't quite hit the mark. It's not enough to stop us appreciating their many talents, though.

They mostly deliver on their promise, but aren't quite the superstars we expected.

Pioneer's N-70AE is among the most complete streamers we've seen at this price point.

It has vast file support, is easy to use and produces a solid, spacious and detailed sound that feels wonderfully balanced.

In terms of timing, it's as good as Cambridge's 851N and while the app can be problematic, it's a great music streamer - just not quite top of its class.

As with other QLEDs, there are issues with relatively poor viewing angles and distracting backlight.

It's just a bit too close to its OLED rivals on price, but if you end up getting the QE65Q7F, you won't be disappointed.