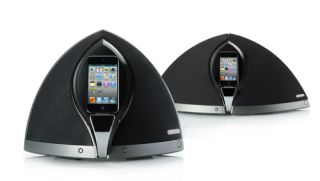 If you want to listen to music stored on or streamed from your Apple device – be it an iPod Touch, an iPhone or an iPad – wireless speakers are the way forward. But there is still a place for the humble iPod dock in these wireless times, not least if you have an iPod Classic (sadly now discontinued) or have treated yourself to an iPhone 6.

If you want a connection that doesn't have to rely on the strength of a wireless connection, the option to replenish your iPad, iPhone or iPod battery at the same time as playing your music, and superior sound quality: a docking station is the answer.

With no shortage of iPod docks on the market, we cast our eye over some of the best you can get for your money – whether you're searching for a bargain on a budget or heading for the top of the range, we've got the dock system for you covered. And the best news is, there are some great deals available on some five-star docks...

You don't have to part with a huge wedge of cash to get yourself a top performing dock system for your Apple device, as these examples show:

An unassuming iPod speaker dock that's small, lightweight and will cost you no more than a night out on the town, the iLuv iMM289 is a pint-sized surprise that we've seen priced as low as £20. What's more? It also caters for video with one rotation.

Pure comprehensively nailed the balance between price, feature count and ease of use with its Contour 100Di. There's a dock for your Apple device, an FM radio and a DAB tuner. Build quality is far above what we'd expect at this price too.

OK, so you have the budget to break into three figures but still don't really want to go breaking the bank on your docking station. Take a look at these systems:

Now available for less than £150, from its original price of £250, the Bose SoundDock II is a talented iPod dock and perhaps demonstrates that Bose has more in its locker than just high-end kit. A good place to start if affordability is a key factor.

Here's another dock system that's come down in price since we first got our hands on it – now available from £140. A versatile, talented, and enthusiastic speaker dock, you're able to sit an iPad no problem and also to connect non-Apple devices, too.

The Logitech UE (Ultimate Ears) was the company's first AirPlay speaker dock and was named Best speaker dock £200-£350 in our 2012 Awards.

Logitech’s AirPlay-toting speaker dock sounds the business and now comes in under £150, and of course offers the bonus of wireless music as well as a dock.

Fancy a set of desktop speakers with a dock? The Epoz Aktimate Micro is the company’s best offering yet.

Speakers come in the form of a powered ‘master’ speaker and a passive ‘slave’, though you’ll need a Lightning adapter or use the 3.5mm input for latest generation Apple devices.

With a step up in budget comes a step up in performance and these dock systems will prove themselves to be talented companions for your Apple device:

As we’ve come to expect from B&W products, the Z2 is as stylish as its predecessors. It remains a really engaging and pleasing speaker, and its attractive design and smooth sound will win over many hearts – and we've seen it selling for £259.

Down from £500 to £220, this was our Awards 2012 Product of the Year in the Speaker Docks category. This JBL is a fun-looking, fun-sounding dock that’s worth every penny of its asking price, more so that it's now available for less. And it remains solid even with an iPad docked.

If budget isn't an issue when it comes to finding the best dock for your iPod, iPhone or iPad, here are what we consider to be the best systems money can buy:

A step up from Bowers and Wilkins' original Zeppelin in so many ways and a must-hear for iPod dock buyers. The docking station is of course joined by Apple AirPlay functionality, making it an even more enticing purchase.

It might not be the best all-round option going, but the Marantz Consolette remains a unique AirPlay-and-more device that can sound simply gorgeous.

Expensive, but the Consolette’s physical design is superb and it's ably matched by the sound quality.