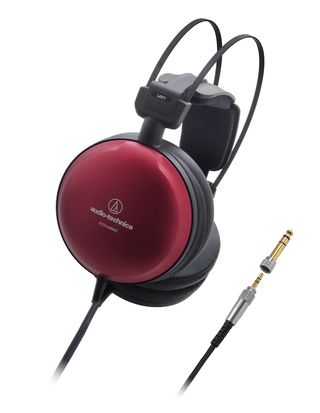 Audio-Technica unveiled a string of new headphones at its annual product launch in Tokyo this week. There are three ranges in the new line-up: Solid Bass, Art Monitor and the rather oddly named Earsuit.

Only the Art Monitor range will be coming to the UK, with prices to be confirmed shortly.

All four have a newly designed 5.3cm driver optimised for high-resolution audio playback, a new 3D-type 'wing support' headband for improved comfort during long listening sessions and D.A.D.S technology which increases the air damping effect within a double-structured housing to reproduce what Audio-Technica decribes as " a more relaxing bass sound".

Additional features on the flagship ATH-2000Z include a lightweight titanium earcup design, a specially coated diaphragm for improved midrange performance and a four-core cable.

Next up, the ATH-A1000Z gets red aluminium earcups and a magnesium baffle designed to "reduce unnecessary modulation", as well as the same four-core cable. The ATH-A990Z and ATH-550Z are fitted with a tangle-free elastic TPE cable.