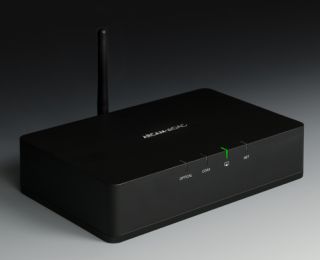 Arcam is relaunching its airDAC, which the UK manufacturer says has been upgraded for "universal app-controlled Universal Plug and Play (UPnP) streaming".

The high-end AirPlay streaming DAC was first launched last summer, but has been redesigned with "increased cross-platform functionality" following a shortage of AirPlay components.

Arcam has designed the airDAC to connect to any hi-fi or home cinema system and it is able to stream music wirelessly from a range of digital sources, including smartphones and computers.

Meanwhile, the company also says that the airDAC can connect and upgrade sound from devices like CD, DVD or Blu-ray players, while a free SongBook UPnP Control App is also available.

The 1.1kg device comes with AirPlay/UPnP and SPDIF/Optical inputs, supporting sample rates up to 96kHz at 16- or 24-bit. The frequency response ranges from 10Hz to 20kHz.

It is compatible with 802.11 b/g/n wi-fi, but the airDAC also includes a wired ethernet connector. It is housed within a cast-alloy case that also features a non-slip rubber base.