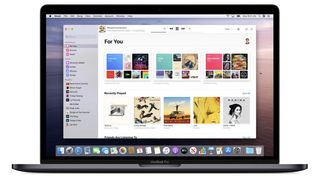 Since the news of Apple's decision to axe iTunes, there's been much speculation as to what will actually happen to our iTunes libraries when the next version of macOS, macOS Catalina (10.15), arrives this autumn.

Keen to placate users after its announcement, Apple has now released a statement that aims to assure people there's no need to worry about losing any music or movies.

Apple says: "macOS Catalina makes it faster and simpler to access all of your 'ripped' or imported music, purchased media, and more. The new apps organise your media just like the same apps on iOS." Sounds like a case of new apps, same library.

Interestingly, the iTunes Store will still be available to buy music on Mac, iOS, PC, and Apple TV.

Apple is also keen to reassure us none of the Easter gift cards we've yet to use will become null and void. iTunes Gift Cards and iTunes credits will be maintained and can be used with the new apps and the App Store.

Backup, restore, and syncing for iPhone/iPad/iPod will move to Finder, which should also afford us an easier drag and drop option when it comes to transferring files.

In addition to the three new apps, audiobooks that you purchased from iTunes will now be in the updated Apple Books app, and you'll use Apple Books to purchase audiobooks in the future.

Those of us old enough to remember iTunes in its infancy – it launched on 9th January 2001 as a software package for organising and playing digital music on Macs – may mourn the loss of the software, but that, as they say, is progress.

No official date for the "fall" debut of macOS Catalina yet, but when we know, you'll know.