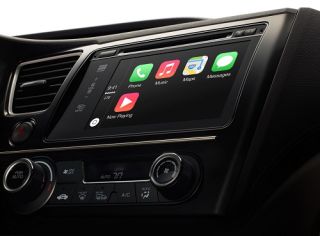 CarPlay was revealed at the Geneva Motor Show, where Apple announced that Ferrari, Mercedes-Benz and Volvo would reveal the first cars with CarPlay installed. Other manufacturers – including BMW, Ford, General Motors and Toyota – are set to follow suit.

Apple CarPlay works with any iPhones with the Lightning connection, including the new flagship iPhone 5S, and comes as an update to iOS 7.

The system works using a wired connection, with Apple using the tagline, "Just plug in your iPhone and go". It also uses a touchscreen, Apple-designed display.

It will enable you to play music and podcasts, including third-party apps such as Spotify; access contacts and make calls; and get turn-by-turn sat-nav style directions using Apple Maps.

Siri, Apple's voice navigation system, is to the fore throughout, allowing you to control CarPlay completely hands-free. Siri will also read out notifications and messages, giving you 'eyes-free' updates.

Greg Joswiak, Apple's vice president of iPhone and iOS Product Marketing, said: "CarPlay has designed from the ground up to provide drivers with an incredible experience using their iPhone in the car.

"iPhone users always want their content at their fingertips and CarPlay lets drivers use their iPhone in the car with minimised distraction."

Apple CarPlay is set to be available in "select cars shipping in 2014".