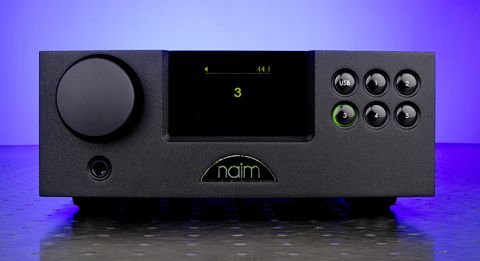 Bold, punchy and precise, and now supports DSD – Naim’s best ever DAC just got even better

It’s fair to say Naim didn’t spring into digital music with quite the same gusto as some of its competitors.

Instead, it scoped out the market and tackled one thing at a time – first by focusing on streaming, then adding digital outputs to its CD players, before turning to the burgeoning ‘desktop audio’ sector with the launch of the DAC-V1 in 2013.

This is the second DAC from the company, but the first that also works as a headphone amp for desktop listening and features an asynchronous USB port for connecting directly to a laptop.

This allows the DAC to control the information flow from the laptop rather than vice versa, altogether reducing jitter and resulting in better sound quality.

Since we last heard it, Naim has released a firmware update to offer support for DSD files (both single and double speed) via the S/PDIF or USB inputs, an update Naim says has required significant optimisation of the DSP code (which has in turn improved sound quality).

It has also added a Sample Rate Conversion (SRC) mode to help improve the performance of S/PDIF sources that don’t have an accurate clock, allowing the digital input to adjust itself to signals that are out of range.

Physically, the DAC-V1 is the same product as in 2013, which means Naim’s distinctive green and black styling is present, as is its half-rack aluminium shell and handy OLED display.

There are a handful of buttons on the front panel, which makes selecting your input easy, or you can use the included remote instead.

As with rival products in this sector, the Naim DAC-V1 can work as a preamplifier too. You’ll find three coaxial inputs (one BNC and two RCA) and two opticals for hooking up various sources.

Opticals are limited to 24-bit/192kHz, while the USB port is capable of handling up to 24-bit/384kHz. All of the inputs, bar the opticals, can accept DSD too. As for outputs, you can choose between regular RCA analogue outs for hooking this up to an amp, or alternatively there’s a DIN output instead.

On the front panel Naim has included a 6.3mm headphone jack for using the DAC-V1 as a headphone amp.

We plug our headphones in and are greeted with Naim’s signature sound, which balances the ability to be hard-driving, focused and dramatic with the subtlety and finesse needed to handle more delicate pieces of music.

We’re not sure there has been any drastic change to the sound from the recent update, but then there didn’t need to be. The performance it demonstrated in 2013 is as strong now as it was then, and isn’t one that’s about to be easily bothered by new competitors.

Play a 24-bit/kHz recording of Sugah Daddy by D’Angelo and the Vanguard and the Naim immediately shows itself to be a big, full-bodied performer with superb rhythmic ability.

There’s real precision here, with the DAC-V1 meticulous in its handling of the starting and stopping of notes. The piano instrumental might be simple, but it’s delivered with attitude, thanks to the punch the Naim affords it.

Meanwhile, the handclaps and percussion that support the melody punctuate it with toe-tapping levels of bite.

There’s a huge amount of detail here too. Not quite enough subtlety to bother the Chord Hugo, but not a million miles away either.

You’ll have no trouble picking out each part of the song’s instrumental and vocal, and there’s plenty of space to the presentation to allow each part to build and develop too.

As the song introduces more and more rhythmic elements, the DAC-V1 has no problem keeping everything organised, without ever sounding clinical or disjointed.

It’s a solid sound across the board, from its powerful low end and strong, focused midrange to its refined, well-balanced treble that keeps it from sounding harsh.

It’s not the most relaxing listen, throwing everything forward in a very upfront, exciting presentation. That can be softened to some extent with some careful matching if required.

Switch the tempo to Ferdinand Rebay’s Sonata in C for violin and guitar, and the Naim has enough finesse to display texture in each guitar strum, while the violin moves through the track with agility.

As the different sounds intertwine, the Naim keeps a handle on dynamics and demonstrates the gliding sweeps from quiet to loud and back down again.

Newly supported DSD files show similar characteristics. A DSD recording of Marvin Gaye What’s Going On is full-bodied, expressive and punchy, staying organised as the track builds and keeping a precise handle on rhythms. Even Spotify tracks get a sonic makeover when played through this DAC.

With the addition of DSD, the Naim DAC-V1 feels more solid a proposition than ever, offering a decent build and design, excellent connectivity and a sound that will have you hooked.

It can’t quite match the superb Chord Hugo for out-and-out dynamics and subtlety, but the extra body and weight here will be enough of a trade off for many.

Like a fine wine, Naim’s DAC-V1 is only improving with age, and wholeheartedly deserves to keep the full five stars.