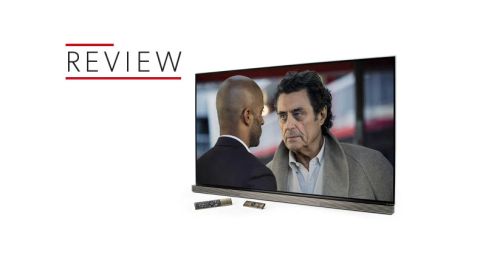 Having great sound to match an excellent picture is important. That’s why we usually recommend that your new TV purchase should be accompanied by a new sound system.

But what if you could buy a new TV that has an upgraded sound system built in? How much extra would that be worth?

LG is hoping your answer is “about £3700”, because that’s how much more the OLED65G7V costs than the OLED65B7V (which, in terms of picture quality, is almost identical).

Despite the G7V delivering one of the best audio experiences available from built-in TV speakers, our guess is your answer might be considerably lower.

And though it’s perfectly possible a sound system for your TV could reach £3700, the one built into this TV certainly isn’t worth that.

The sound from most TVs is pretty poor because they contain tiny speakers that have been forced into the chassis wherever they fit, rather than where they’ll be most effective.

LG avoids both issues with its G7 by making the audio system a fundamental part of the design. Here, the stand is the sound system.

It’s deep and wide, allowing for bigger speaker drivers to be used – and more of them (this is a 4.2 system). They mostly fire forwards, allowing for greater directness in the audio performance.

At least that’s the theory. In practice, the G7’s sound is projected reasonably well, but a lot of the audio still feels as though it’s confined to the immediate area around the screen itself.

There are lots of good things to say about this TV’s sound. Detail, punch and dynamics are impressive by flatscreen standards, and there’s a spaciousness to the sound-stage no other TV we’ve tested can match, particularly when you feed it a Dolby Atmos signal (Atmos via Blu-ray isn’t yet supported, but will shortly be enabled via a software update).

Even with a standard Dolby signal, the TV does an admirable job of placing effects in three-dimensional space. It doesn’t surround you in the way a proper speaker system or even a virtual surround soundbar can but, for an integrated system this is impressive.

Incorporating a comparatively large speaker system into the stand has resulted in a design that’s certainly unique and striking, but not without its issues.

For one, this telly’s footprint is huge, both in width and depth. You’ll need a large TV support if the G7 isn’t going to hang over the edges.

The speaker-pedestal folds up behind the back of the TV, revealing standard VESA points that make wall-mounting straightforward.

The folded up portion of the stand pushes the screen a couple of inches off the wall, but the overall look of a wall-mounted G7 is undeniably swish.

LG’s other 2017 OLEDs (with the exception of the “Wallpaper” W7) have a fairly substantial plastic protrusion on the back of the panel housing all the connections and processing bits and pieces.

On the G7 these are housed along with the speakers in the stand, so the panel itself can be super-thin and flat across far more of its surface. It’s like a razor blade sticking out of a posh bar of soap, and an impressive look for sure.

LG’s webOS 3.5 operating system is the same as on all of the company’s other 2017 sets, and that’s no bad thing.

It’s a colourful, welcoming and customisable user interface that treats sources and apps with equal importance and does a good job of getting you to the content you’re after as quickly as possible.

The webOS 3.5 also brings with it a substantial range of on-demand video apps, including Netflix, Amazon Prime Video, Now TV and the usual catch-up services.

Unlike the other models in LG’s 2017 OLED range, the G7 comes with two remotes: the standard, motion-sensing zapper and a smaller, stripped-back alternative.

We aren’t convinced of the value of the second remote, as the original model combines all the buttons you could possibly need with pointer functionality in an already perfectly ergonomic package.

Still, having a back-up remote for when you lose the main one down the back of the sofa is a good thing.

Getting the best picture from the OLED65G7V is just as easy as it is with the rest of the OLEDs in the range. Switch from Eco mode to Standard and turn the Energy Saving Feature off to prevent the screen being hobbled from the outset.

We’d also recommend reducing the Contrast a little, to reveal more detail in the brightest whites, and switch Dynamic Colour to medium to add a bit of extra punch.

Finally, you’ll want to play with the TruMotion feature. We favour switching it off entirely, but you might prefer a few points of de-judder and de-blur - even though these can create some pixelated confusion during complex motion.

That’s the Standard mode calibrated then. But feed the TV an HDR10 or Dolby Vision (HLG and Advanced HDR by Technicolor are also supported but not readily available at this point) signal and it will switch to the Cinema Home mode, which carries a whole other load of presets.

Thankfully, this requires little tweaking – we change White Balance to Medium and turn TruMotion off, but that’s it.

MORE: HDR10 v Dolby Vision - which is the better?

With support for Dolby Vision, the most advanced HDR format currently available, we start by watching Stranger Things via the G7’s built-in Netflix app, a great first stop on your Dolby Vision journey.

There’s no beating an OLED for blacks, and so it proves yet again. As Hopper explores the tunnels beneath the town there is perfect, pitch blackness where required and precise low-light detail exactly where it should be.

When he lights a torch, the flames shine brightly and vividly against the darkness, which, thanks to the lack of a backlight, is as black as it should be.

Even with a 25 per cent increase in peak brightness for LG’s 2017 OLEDs, they’re not nearly as bright as the best backlit TVs but, thanks to the purity of the blacks, contrast is spectacular. Dark scenes have never looked better.

MORE: OLED v QLED - which is the better technology?

A Samsung QLED will make more of bright scenes, but the G7 and its siblings are still strong performers here - particularly in terms of colours, which are lush, full and vibrant, as well as overall solidity and three-dimensionality.

When it comes to motion, the G7 is a naturally fast and responsive panel, so even with TruMotion switched off there’s good control and composure. Only a small amount of perfectly acceptable blurring is present.

Take the step down to 1080p content and the G7 continues to impress. Contrast is again superb, even without HDR, and detail levels are extremely impressive.

We also continue to be impressed by how LG’s 2017 OLEDs keep edges sharp and crisp without ever making them look unnatural or exaggerated. This is just an extremely natural image all-round.

On top of all this, the G7 and its siblings practically work miracles with standard-def content. It appears cleaner, sharper and more detailed than it has any right to given the size of the screen and the amount of processing involved.

If you’re someone with a much-loved collection of old DVDs, this is the 4K TV to watch them on.

Gamers are in luck, too, as the G7 does a fabulous job with computer-generated content. We also measured just under 22ms input lag in Game mode, which is more than fast enough for even the most hardcore player.

We expected the G7 to look great because LG promised it would deliver the same picture as the B7, C7 and E7.

The question was whether the sound system could possibly justify the extra £3700 over the cheapest 65incher in the range. Predictably, it can’t.

The G7 produces mighty fine sound for a flatscreen, but a premium soundbar sounds significantly better. Buy the OLED65B7V and add the Sony HT-ST5000 - you’ll get the same picture and superior audio performance, and save yourself £2200.

If you simply can’t bear the idea of adding any kind of speaker system to your TV, the G7’s neatness and swish styling might trump the fact you can get better sound for less.

If you also have deep pockets, we say go for it. But for those who think great OLED picture quality deserves equally excellent sound, there are better and more affordable ways to get there.