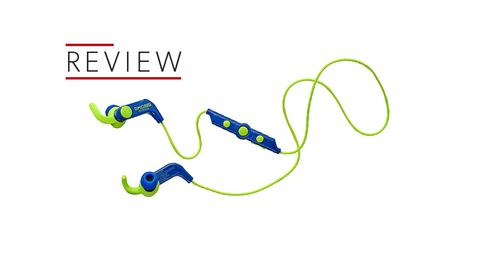 Affordable, but limited in ability

The Koss Fitbuds BT190is are budget wireless earphones for people looking to keep costs down – perhaps as a pair of headphones to wear while running or at the gym.

Given the price, their sound is pretty respectable, but poor wireless performance means they are a trial to use.

The Koss Fitbuds BT190is are clearly made for sport use. Earphones don’t usually look this bright or this angular without having runners in mind.

They also come in plain white or black, as well as lime green or the orange of our sample pair.

Like many sporty pairs, the Koss Fitbuds BT190i have silicone ear stabilisers that, when rotated in the ear properly, stop them from bouncing out of your ears at the first tug.

You can take the hooks off, but you probably won’t want to as they are the only real securing point aside from the standard tips.

The Fitbuds’ cable doesn’t run over your ears, and there’s no neckband to hold them in place.

The style is slim and light despite the larger-looking earpieces. And like most wireless earphones without a chunky battery part attached, the Fitbuds don’t last long between charges.

Koss says they last or around four hours at “moderate” volume, which is fairly consistent with our experience. They’re not much use for those who listen to music or podcasts all day.

The battery is charged using a standard microUSB connector on the three-button remote built into the cable. This remote performs the usual music and volume control duties.

Where the Fitbuds’ tech falters is Bluetooth performance. We try them with a few different phones and there are more blips and drop-outs than we expect.

Range is fine, but movement seems to cause significant problems. It’s not automatically a deal-breaker, but you need to be sure to keep them away from sources of interference.

There’s nothing obviously wrong with the Koss’s sound. It’s not harsh, not veiled or too narrow. They have solid low-frequency response, which projects very deep bass with gusto. That’s good for bassheads and exercisers alike.

There’s also surprisingly firm body to the mid-range, giving a certain degree of integrity to the sound that outperforms the overall tone and fidelity.

So the Koss Fitbuds have a solid outline of a sound, the right structure or building blocks, but the delivery is a little crude and detail rather limited. Compared with the SoundMagic E10BTs they lack smoothness, refinement and sophistication.

The Fitbuds are enjoyable enough but, as is consistent with the budget price, are altogether ordinary. We prefer the Skullcandy Smokin' Buds 2, which are a even more affordable, a little smoother and more dynamic -though admittedly bulkier.

As there’s nothing outright annoying about these Koss in-ears, they are ok for casual listening. Your ears quickly adjust to the sound - unless you’re skipping between them and most rivals.

The Koss Fitbuds BT190is’ price is appealing, and their fit works particularly well for runners. However, they’re not particularly exciting, with average performance in many areas.

At around four hours, battery life is the bare minimum for a usable headphone and wireless performance is flaky.

While the sound is broadly inoffensive it doesn't have the smoothness, detail or dynamic drive of the best low-cost pairs.