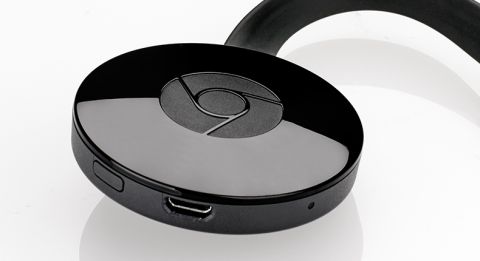 We couldn’t ask for more from the new Chromecast. It’s a faster, more refined experience, and doesn’t cost a penny more

Google Chromecast 2 deals
AuCatStore(TM) for Google...
Amazon
AU
$78.80
View
We check over 130 million products every day for the best prices
powered by

When Google Chromecast first arrived on the scene a couple of years back, it landed right in the thick of the media streamer boom, heralded by the likes of Roku, Sky, Amazon and Apple. It was (and still is) a time of streaming sticks and boxes galore.

But in came Google pitching a different kind of beast altogether, and quickly won the hearts of a streaming-savvy audience looking for simplicity, affordability and vast support.

Instead of offering its own batch of on-demand content, Chromecast simply ‘casts’ (ie. streams) content from a smartphone, tablet or PC/laptop over wi-fi. Your device of choice acts purely as a remote control.

It couldn’t be easier to use. Go into any Cast-enabled app on your device (we’ll get to that later), choose what you want to watch, press the Chromecast icon and it’ll ping up on your TV screen.

You’re not actually sending content directly from your device to the screen; instead, the Chromecast plucks it from the Internet and feeds it to your TV.

Two years on, the second-gen Chromecast (officially ‘Chromecast’ as opposed to ‘Chromecast 2’) has arrived with speedier operation, improved software and a performance boost.

It’s more of a makeover than a new business model, which makes sense in light of Chromecast’s popularity. Let’s start with the most glaringly obvious change: appearance.

While the original Chromecast resembled an oversized memory stick, it’s now a round disc the size of a yo-yo (available in black, yellow or red) with a HDMI cable sticking out of it. Apparently, the new shape is to accommodate bigger multi-directional antennae inside.

It remains powered by microUSB, so you’ll need to stick the USB-end into a TV port or, if there isn’t a one free, use the supplied mains adapter. Google has made the cable end magnetic so that the main circular body will cling to it instead of dangle down and be an OCD-sufferer’s worst nightmare.

As ingenious as it sounds, it’s not always as good in practise. We plugged it into one of our Sony TV review samples and the port’s surroundings got in the way.

The new Chromecast takes on more than just a new form. For starters, the number of Cast-enabled apps has steadily grown since the original Chromecast’s debut so there’s something for everyone – movie buffs, sport fanatics, music fans.

BBC iPlayer, Netflix, Blinkbox, YouTube and Now TV will sort our your Sunday binge, while sport services BT Sport and Eurosport Player will cover your Saturday one. Music services Spotify and Deezer and Internet radio apps TuneIn Radio and Rdio are also cast-compatible.

The bad news is that Amazon Instant Video, ITV Player, 4OD and Demand5 are yet to make an appearance, but with apps sprouting up all the time, hopefully it’s just a matter of time before they do.

The software side of things has had one of the biggest revamps. While the Chromecast app used to be a go-to for purely sorting out wi-fi settings, it now has a greater purpose with one particularly useful thing in mind: content discovery.

The app’s interface is split into three tabs; one displays your already-installed Cast-enabled apps, while another is a shop window for all the compatible apps available to you.

Google has done the legwork, so thankfully it’s no longer a case of just guessing what apps can be cast. It’s an inviting window at that, with apps helpfully divided into categories: ‘Apps for Movie Lovers’ and ‘Apps to Start Your Day’ for example, or our favourite ‘Couch Potato Pleasures’.

The last tab lets you customise your connected Chromecast or Chromecast Audio devices. While the old Chromecast used random photos as screensavers, you can now add and loop photos from Flickr or Facebook. A nice, personal touch.

Whether you’re using a LG G4 or Apple iPhone 6s Plus, the app experience is equally intuitive and utterly responsive. If you’re performing general playback controls or changing volume, communication between your device and TV is almost instant.

The downside for Apple users is that the iOS version can’t cast – essentially mirror – your device’s screen onto the TV’s as you can with Android. And remember, you’ll have to download the iOS version of the Google Play Music app to cast local music files from your iPhone or iPad to the telly.

Last but not least, performance has been given a boost. The Chromecast now uses dual-band 2.4 or 5GHz 802.11ac wi-fi and an ‘adaptive antenna’. In layman’s terms, that promises a faster, more stable Internet connection.

In our hands-on review, we said that our demonstration of the Chromecast was very fast, and more hours on the clock confirms that. Typically, loading content and skipping forwards and backwards through programmes is a good two or three seconds quicker than through the old version.

That may be down to the new Fast Play feature, which aims to eliminate buffering by pre-loading the first few seconds of content so it’s never forced to play catch-up. Whatever it is, we like it.

The new Chromecast also outputs a cleaner, crisper 1080p picture. Whether we’re casting The Great British Bake Off Masterclass on BBC iPlayer or About Time on Netflix, colours are more grounded and refined, making them seem notably gaudy through the old stick. Paul Hollywood doesn’t look quite as orange and Mary Berry’s blazers aren’t so luminous.

And where before the picture was prone to the odd motion judder, it’s now more stable. Just bear in mind that you’ll need a good, strong wi-fi connection for best results.

Camera pans across the top of Madeira cakes and around the Bake Off tent are buttery smooth and blip-free, the only drawback is a hint of motion blur around the edges of objects.

The new Chromecast is quite the upgrade. It’s taken the winning recipe of neat, simple and efficient streaming and refined the technique in almost every way, from build to use to performance.

So what’s the damage for this new-and-improved discus? That’s the best part. Sticking with its predecessor’s £30 price tag, it doesn’t ask a penny more for the progress it’s made.

If that’s not enough to win you over, we don’t know what will be, for rarely are media streamers quite this appealing.

See all our Google news and products