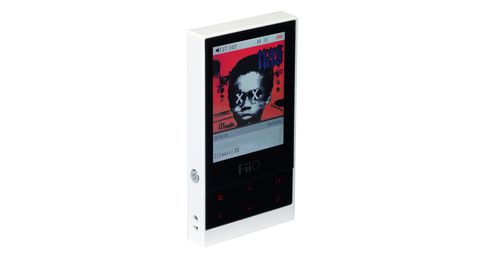 The last portable music player we saw from FiiO (the X5) was demonstrably big.

Either the Chinese brand has taken our size-ist criticisms to heart or was simply up for the challenge, because the M3 is around the size (and weight) of a matchbox.

It's almost too portable, in the same way a wedding cake can be too pretty to eat. But size aside, it’s hardly a music player of humble stature. For £50 you get a player that can handle hi-res music – WAV support goes up to 24-bit/96kHz, while FLAC is limited to 24-bit/48kHz.

There’s 8GB internal storage onboard – enough for over 200 MP3 albums, or around ten hi-res albums – and that can be expanded with a microSD card up to 64GB that slots into the bottom of the unit.

Just alongside it, there’s a 3.5mm headphone jack and a microUSB slot for charging. A 2.5 hour-charge gets you 24 hours playback time, only slightly longer than it took our team to attach the M3’s lanyard accessory.

Despite its fiddly nature, the attachment comes in handy, particularly considering the FiiO’s minute size.

Apart from the power button, and a hold switch to prevent any accidental button-pressing inside your pocket (they sit on the edges), most controls are backlit buttons underneath the display.

They’re unsurprisingly close together – more fitting for a Borrower than someone with big-thumb syndrome – so we’d prefer the volume buttons to be moved to the side.

Switching from an Apple iPhone 6 Plus to the FiiO, with its 2in screen, feels a bit weird but the display is bright and coherent, and uses its real estate wisely.

During playback it’s mostly taken up by album art, and there’s track and album title on display too. Curiously, bit- and sample-rate show only when album art is absent, as a kind of replacement.

Still, holding down the menu button takes you to the settings, where you can see track info, as well as add tracks to playlists, select EQs and make general playback changes.

The interface is clean and, once you’ve got a grip on its symbol-centric design, it’s pretty intuitive too. Your music library can be displayed by track, artist, album or folder.

Drive and ardour are very much the FiiO’s sonic fibre, so we kick things off with Animal Collective’s The Burglar (16-bit/44.1kHz).

The psychotropic synths are communicated with welcome chutzpah, and the FiiO has the clarity and precision to avoid tripping over the song’s experimental rhythms and unconventional structure. You get the chance to hear (if not entirely follow) what’s going on.

Onto Lubomyr Melnyk’s Pockets of Light (24-bit/44.1kHz) and there’s detail where it counts, each piano note distinct and cohesive – even if a great deal of the 19-minute piece’s dynamic variance is largely overlooked.

A pleasing degree of tonal balance and weightiness helps the M3’s case too.

We find the presentation of rivals from Sony (NW-F886) and LG (G5) a bit more spacious though, which becomes a crucial asset when the layered melodies become more convoluted and the vocal washes over the top.

The bottom line is, if you’re pursuing hi-res audio – above CD-quality music – you’d be better off getting a loftier (in quality and price) smartphone or even a hi-res music player from the likes of Sony and Astell & Kern.

The buds in the box aren’t particularly ergonomic, nor are they good enough to make the most of the FiiO’s talents. We’d file them under ‘emergency only’ and employ something like the SoundMagic E10S at the bare minimum.

The FiiO M3 will appeal to those who don’t want their music collection clogging up storage space on their phone, but aren’t prepared to fork out a significant amount for a separate device either.

That kind of approach to music on the move may be more of a minority interest now than it was five years ago, but nevertheless it will have its fans.

For everything the FiiO offers at this price, it deserves recognition.