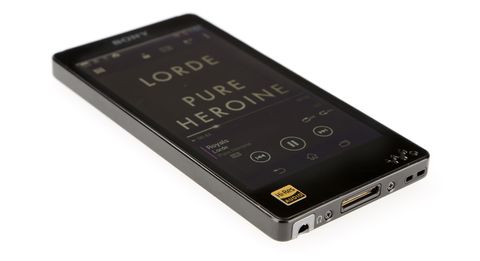 The Sony’s an object lesson in building a well realised, high-performing player

Simplicity, elegance and overarching rightness are the features that spring to mind when it comes to this Sony Walkman's interface.

THIS is how a digital audio player should present itself: a big (4in), high-resolution (854 x 480) screen, an elegantly proportioned (117 x 59 x 8mm) and lightweight (103g) body, and a stack of functionality beyond playing back digital music files.

The Sony does without line or digital coaxial outputs, with socketry restricted to a headphone socket and proprietary USB connection to drag/drop music via Android File Transfer. And, of course, as an Android device the NWZ-F886 has a plethora of functionality in terms of apps and web browsing.

NFC and Bluetooth functionality make connecting to other equipment simple, 32GB of on-board memory means the Sony won’t be exhausted by an album’s-worth of high-res audio, and a battery that’s good for upwards of 24 hours of playback, all make the NWZ-F886 a fantastic day-to-day player.

The Sony comes supplied with headphones (noise-cancelling ear-buds that aren’t bad at all in terms of sound and comfort), and integrated speakers (though the xLOUD system is much more ‘x’ than ‘LOUD’).

Play a 24bit/192 FLAC file of Michael Jackson’s Billie Jean and it’s immediately obvious the NWZ-F886 is a refined, insightful and lavishly detailed listen. The soundstage seems to occupy the full 180deg of extreme left to extreme right, and positioning of instruments on it is pinpoint.

There’s sufficient attention paid to dynamics to allow the different intensities of rhythm guitar strums to become obvious. And Jackson’s vocals (both the words he sings AND the gasps and yelps that punctuate them) are packed with character. The bottom end is pacy, finger-snappingly well timed and substantial; the top end glints benignly.

These traits of high-gloss good taste and undemonstrative authority are, if anything, even more pronounced with a switch to Miles Davis’s So What. The immediacy in double-bass plucks, and ride-cymbal and piano hits is impressive. Integration between instruments, the combining of different elements into a seamless whole, is endlessly impressive.

A step down in file quality to an iTunes-style ‘just about acceptable’ 256kbps file of The Hold Steady’s Sequestered In Memphis brings the inevitable drop-off in detail levels, dynamism and all the rest of it. But the Sony manages to maintain its dignity, delivering the song with plenty of attitude and attack.

In fact, there are very few significant shortcomings to the way the NWZ-F886 performs. Some reviewers suggested the Sony is short of out-and-out volume – while this isn’t automatically true, there’s no denying Fiio's X5 and iBasso's DX50 go louder, and if you’ve done the sensible thing and ditched the bundled Sony noise-cancelling earbuds there’s a chance a noisy environment could defeat the NWZ-F886.

It's worth noting the rather ‘safety-first’ attitude the Sony has towards the midrange. There’s a slight concavity in the way music is presented, a recessing of the midrange that can make vocalists occasionally struggle for primacy. The overall effect is a slight inhibition of overall dynamics which makes the Sony less immediately impressive, less ‘up-and-at-‘em’ if that's your thing. For us, however, the Sony's more refined approach, particularly with high-res tracks, is just the ticket.

Without a doubt, though, the NWZ-F886 is a nice object – it has a great control interface, functionality and (the volume level dispute aside) impressive sound at any file size. After a high-res music player for this sort of money? We'd plump for this Sony.