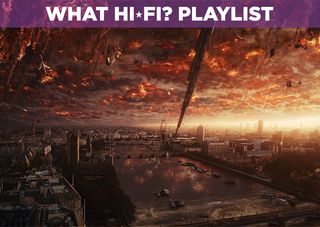 Independence Day: Resurgence is a sequel that raises the stakes without raising the tension. It’s like the difference between someone holding you at knifepoint and the impending threat of nuclear war; sure, the latter is objectively worse, but it’s not going to affect your day in the same way.

Resurgence is set 20 years after the events of the Independence Day, in an alternate 2016. The United Nations has set up the Earth Space Defence program, using the technology salvaged from the events of the first film and repurposed to protect the planet.

When a spaceship belonging to one of the alien species’ Queen appears above the Atlantic, it’s down to a handful of new recruits and some of the old guard, to take it on.

Unfortunately, this is executed too stereotypically to be interesting, with David Levinson (Jeff Goldblum) even making cracks about how cliché it is for Tower Bridge and the London Eye to be hit by the destruction. That doesn’t stop the film from doing it, but it’s the thought that counts, right?

That said, the destruction is a real spectacle. The level of detail in the rubble of floating cars and demolished infrastructure when Singapore is attacked will give any television or projector a run for its money. And aerial shots over the devastated East Coast of the USA have a great range of colours to test your home cinema set-up.

There’s a clear dynamism to the huge explosions, alien screams, and quick, high-pitched sounds of the extraterrestrial weapons to treat your sound system to. The splicing of strategic planning in an enclosed room with the joint ground and air assault at the climax of the film needs to be tightly organised, too.

It’s just a shame that these scenes don't add much to the plot. Director Roland Emmerich has always focused on effects over storyline in 2012, The Day After Tomorrow, and even the original Independence Day; ignoring the specifics of the threat in order to focus on how people deal with these all-encompassing disasters.

But Resurgence fights a war on two fronts. It tries to to deliver large-scale space battles, in which you can’t tell the difference between the alien and human ships, while simultaneously taking up time that could be spent fleshing out the characters.

There’s enough exposure here to set up dynamics between characters, but it’s all just theoretical. The rivalry between Jake Morrison (Jake Hemsworth) and Dylan Hiller (Jessie Usher) for leader of the squadron, or the romantic fascination Rain Lao (Angelababy) holds over Charlie Miller (Travis Trope), exists in the script, but the actors never make it real on screen. An hour into the film, you’re yet to be convinced that you should be rooting for the survival of the human race.

The interesting themes that crop up just aren’t capitalised on, like the fact that many of those fighting against the aliens were probably too young to remember the original attack in 1996, or that the military action bears a striking resemblance to American defence post-9/11.

There’s also an irony to Americans defending the world against a race that has suddenly appeared with the intent to strip the surrounding area (or planet) of its resources and exterminate the inhabitants. But these opportunities pass Resurgence by.

Ultimately, we'd recommend protecting the magic of Independence Day by skipping its sequel. Compared to the original, this film feels… well, alien.