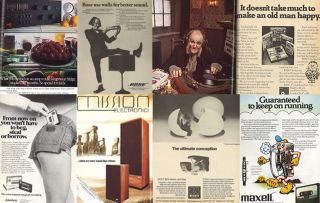 The 1970s was an interesting time for music and technology. From the disbanding of The Beatles to the rise of disco, from Bill Gates and Paul Allen founding Microsoft to the launch of the Sony Walkman and the first commercially available VCRs.

The decade also saw the first issue of What Hi-Fi? magazine, published in 1976. Alongside a host of wonderful products were, at times, some fairly weird adverts. Here, we've rounded-up some of the more eye-catching examples - all of them helping to remind us that 40 years is, indeed, a very long time…

What came first, the cartridge or the turntable? Whatever the answer, AKG's advert for the P8ES cartridge is eggsellent, and that's no yolk.

This advert has everything: science, a good pun, references to famous English music hall comedians... The Bose 901 Series III "reflecting sound" speaker delivered better sound, it was claimed, by bouncing it around your room. It's an idea revisited years later by plenty of soundbars and wireless speakers.

The speaker and equaliser in the picture are still worth around £240 today, so if you have one gathering dust, and you can bear to part with it, you could make a few quid and get something a little more high-tech.

Eagle's A4400 amplifier advert, and its still-live retro website, are a sight to behold. As tasty as that cake looks, we'd probably rather have the amp connected to a good sound system than chilling next to some lemons, though we just about get the message (amps are expensive, so choose wisely). On the flip side, this is one way to make sure your kit doesn't run too hot...

BASF Chemicals Limited first started making magnetic tapes in 1962, based in a converted church in Highbury, London. With cassette tape album sales growing again, maybe it's time for a revival? But if, to you, the Dickensian vibe of this advert doesn't make much sense at first glance… you're not the only one.

Not wanting the subtext to be missed, BASF mentions in the text, "This is a Christmas advertisement". The idea seems simply to be that the old Scrooge in your life might appreciate some BASF kit for Christmas. Hmm. As they say about jokes, if you have to explain it…

Mission has one of the most impressive strike rates when it comes to five-star reviews over the years. Nevertheless, using a George Orwell quote and an image that looks like a post-apocalyptic Britain in which all that has survived are these speakers, is still a bit out there. That said, we sort of like it...

Celestion's multicultural (but perhaps not quite politically correct) series of adverts is certainly something to behold. The "world of sound" is what Celestion seemed to be offering, even if the terminology seems a little hackneyed.

The company, which was founded in 1926, joined forces with KEF before turning its attention to pro audio gear.

Inevitably, there were plenty of adverts knocking around that made it clear that the women's liberation movement still had much on its plate. Ampex, named after the company's founder, stands for "Alexander M. Poniatoff Excellence". The company began life in the 1940s, manufacturing reel-to-reel tape recorders, but in the 70s it aimed to make more of a mark in the UK with its blank tapes. Blank tapes you could buy rather than steal from other people's shorts, no less.

We've seen some expensive headphones before, and while these Stax Sigma headphones don't quite make the cut, they're still a pretty penny. £259 in 1979 is the equivalent of approximately £1300 in today's money. Promising "panoramic sound" from "electrostatic earspeakers", it was no wonder Stax was going out of its way to justify the outlay.

The year is 1978. Cassette tapes have become sentient, growing arms and legs; they walk down the streets in their cleated shoes, while leering red eyes can be seen from the bushes. While we can't be certain that's what Maxell was going for in its advertisement, we think it's a pretty safe bet. We're also impressed by quite how much explanation there was about how good they were. Lest we forget, we used to review pages of pages blank cassettes...

Is your Toshiba dealer a "friend you can always call on"? Well, that's how the company was advertising its employees at the end of the 70s. While we may gently poke fun, the advice of "listen before you leap" is always good - and it's why we spend as much time as we do in our testing rooms before we pass judgement. Anyone who bought a hi-fi system around this time will recognise the ubiquitous stack hi-fi system, too.

MORE: That Was Then: The first issue of What Hi-Fi?