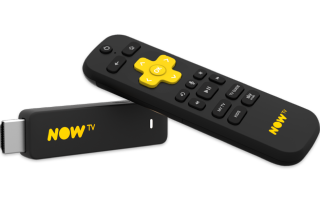 It's a great way of dipping into some great premium TV, such as Sky Movies and Sky Sports without being locked into a 12 or 18-month deal.

The Now TV Smart Stick alone is usually £24.99 at Now TV, but other online retailers (like the ones below) often offer discounts.

The Now TV Smart Box sits under your TV, and can display shows and films in 4K, though that's currently limited to Netflix.

Now TV Boost costs £3 per month, but you can currently bolt it on to a seven-day free trial of any of Now TV's individual passes to try it out for no extra charge.

This usually costs £9.99 a month and gives you access to nine Sky channels (including Sky One, Sky Atlantic and Sky Arts) and 16 channels in total, including Comedy Central, MTV, Gold, Discovery Channel, Fox, Vice and Syfy. You also get over 300 box sets to choose from, including excellent Sky Originals like Succession, Euphoria and Chernobyl.

If films are your bag, you need to check out the Sky Cinema Pass. It costs £11.99 a month, and gives you over 1,000 movies on-demand from Sky Cinema and Sky Disney – and Frozen II is streaming until July 2021. With a new premiere every single day of the year, the library is growing fast.

Like the Entertainment Pass, you can sign up for a free seven-day trial including Boost (meaning Full 1080p HD resolution where available, plus 3 people can watch at the same time). But again, you'll be charged the full whack of £14.99 per month (£11.99 for Sky Cinema, £3 for Now TV Boost) afterwards unless you cancel it, so it makes sense to keep your account details close to hand.

This one comes in three options (or, four if you're adding the new Boost feature for Full 1080p HD, Dolby 5.1 Surround Sound – provided your TV and home cinema setup supports it – plus three simultaneous streams at once.)

The Sky Sports Day Pass regularly costs £9.99 and gives you access to all 11 Sky Sports channels, for one day only. That means, if there were one big match or event you wanted to see, you could just pay for that one day and not have to shell out for the rest of the month.

For the Month Pass, you'll normally pay £33.99. Again, that gives you all 11 channels, with unrivalled access to sport for that month – but Now TV is currently throwing in Now TV Boost for seven days for free when you buy the Sky Sports month pass, meaning you'll get full 1080p HD, 5.1 Dolby surround sound and be able to watch on three screens at once, for seven days. It'll auto-renew at £3/month unless you cancel it after seven days.

If you're happy watching sport on your mobile, you can also nab the Sky Sports mobile month pass, for £5.99 per month. No free trials, but it'll auto-renew unless you cancel.

If you're based in the Republic of Ireland, Now TV is offering an even more enticing offer for three whole months. It's calling it the Ultimate Sports Bundle: Sky Sports and Sports Extra passes for only €36.50 per month – a whopping 50% saving. You've got 'til 11th October to sign up.

Important: unless you cancel it after your three months is up, it'll auto-renew for €73 per month (€34 for the Sports Extra pass and €39 for the Sky Sports Pass), so set yourself a reminder if your budget doesn't quite stretch to it.

Also important: don't forget you'll need to use a VPN if you want to use any of the above services while stuck away from home. You can find out all about those (and which are our favourites) on our best VPN deals page.

ROI: Now TV Sky Sports Ultimate for 3-months €109.50
It's only available if you live in the Republic of Ireland, but if that's you, Now TV is running a deal that lets you nab 50% off three months off all 11 Sky Sports channels ahead of the start of the Premier League season! Sign up by 11th October. View Deal

The Kids Pass gives you access to thousands of kids' shows thanks to its six channels that you can't get on Freeview. These are: Boomerang, Cartoonito, Cartoon Network, Nickelodeon, Nick Jr. and Nick Toons. And recently, Sky's dropped the price from £6.99 per month to just £3.99 – and there's a seven-day free trial.

Now TV Kids pass 7-day free trial (then £3.99 per month)
Access all six channels for free for seven days. Like what you see? Keep the subscription at just £3.99 per month.View Deal

It too has a free seven-day trial, after which it costs £4.99 a month.

Now TV Hayu 7-day free trial (then £4.99 per month)
Get lost in the weird world of reality TV and Kim Kardashian with the Now TV Hayu pass. There's a seven-day free trial, after which you will hopefully come to your senses...
View Deal