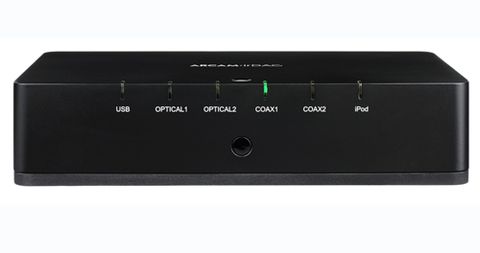 Best DAC £300-£500, Awards 2014. A brilliantly talented DAC with bags of sonic appeal – its main rivals should be worried

The Arcam irDAC takes performance at this price to a new level. In fact, we’re left scrambling for superlatives to use to describe this sensational new DAC.

The irDAC’s rectangular shape is similar to Arcam’s original rDAC: the height is the same, although the chassis is slightly wider and deeper. The way the input indicators hook over the edge of the case (and glow green when in use) is carried over too.

But the design similarities end there. In an attempt to take performance up a notch, Arcam has equipped the irDAC with technology and design cues from the company’s £2000 FMJ D33 high-end DAC.

The irDAC offers a full suite of connections. Twin optical and twin coaxial digital inputs will take the feed from streamers, CD players, TVs, games consoles and so on. There’s also a Type-B USB input.

This is of the asynchronous variety, which means it controls the data flow and not the computer – theoretically resulting in better sound. A switch on the back changes the USB connection between Class I and Class II status (Class II is for feeding the Arcam a 24-bit/192kHz high-resolution stream).

There’s also a Type-A connection. This lets you hard-wire an Apple device and let the Arcam convert the digital signal to analogue. It also charges your portable.

The irDAC is mains powered, but can also be juiced-up by the separate power supplies found in some of Arcam’s other products, such as the A19 stereo amp. Arcam claims this will further improve sound quality.

The “i” in irDAC indicates you get a remote control in the box, unlike its predecessor. The small wand looks and feels cheap, but at least you can change inputs from afar and control the playback and volume of connected portables and compatible media-playing software.

Freebie optical digital and USB-cables are thrown in to get you started too, but you could always look to upgrade these further down the line. There’s also a power cable with foreign plug adaptors in the box.

Where do we start? Well, how about by revealing that we like the irDAC. A lot. Across all inputs, this small black box gives music a quite breathtaking sense of rhythm.

Play a CD-quality file of Ella Fitzgerald’s Let’s Do It (Let’s Fall In Love) and the Arcam captures the vibe of the track perfectly. There’s detail aplenty, with the DAC picking out the delicate piano play, lazy double-bass and Ella’s silky-smooth and beautifully controlled vocal.

But not only does it allow you to pick out the fine details, it’s the way the machine knits, gels and intertwines all the various elements together that really gets your heart going.

Iggy Azalea’s My World has a couple of complex elements and the track can sound lost and confused with inferior kit. But the Arcam has no trouble with a 256kbps stream from Spotify through its USB connection.

The pounding bassline sounds tight and weighty, and while the Arcam sounds more rounded than it does neutral, highs still display sharpness and precision.

For timing and accuracy this DAC is going to be tough to beat. And for those of you wondering whether it’s better than the old rDAC? The words ‘different’ and ‘league’ spring to mind. This model sounds bigger, bolder, more detailed and more cohesive.

Some products are impressive from the moment they’re powered up. The irDAC is one of those – the way it sucks you in and encourages to keep listening is a rare talent and one you can’t afford to ignore.

Former current class favourites such as the Musical Fidelity M1 DAC are well and truly outclassed.