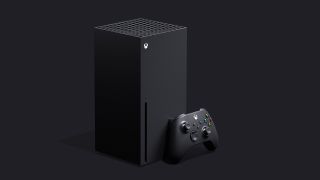 Microsoft's Xbox Series X looks like being quite the powerhouse. It's an 8K monster of a console, original previewed at E3 last year and now confirmed to go on sale on 10th November 2020. And from today, the Xbox Series X pre-orders are live.

The next Xbox promises to be four times as powerful as the original Xbox One X. Indeed, Microsoft has billed the Series X as the "fastest, most powerful games console ever" (though it might be biased). It will have a new 'tall tower' design, new wireless controller and a snappy new interface that's said to load the Xbox Home screen 50% faster than the last Xbox OS. In other words, look out, PS5.

So, how much does the Xbox Series X cost? How - and where - can you pre-order one? You'll find all the details below.

The Xbox Series X costs £449 in the UK while the all-digital Xbox Series S is £249. Below are links to the major UK shops taking part in the Xbox pre-orders. The pre-order price is identical across all stores. Other stores are available.

US: Xbox Series X pre-orders start 8am PT, 11am ET

The Xbox Series X costs $499 in the US while the all-digital Xbox Series S is $299. Below are links to the major US shops taking part in the Xbox pre-orders. The pre-order price is identical across all stores. Other stores are available.

Shoppers in Australia and New Zealand were the first to get their Xbox Series X pre-orders in, with the 8am pre-order time arriving at these time zones first.

More than you can afford? Microsoft is rolling out its Xbox All Access subscription service to 12 countries, including the UK (via GAME and Smyths Toys), US (Best Buy, GameStop and Walmart) and Australia (via Telstra).

The services allows to pre-order an Xbox Series X without paying a penny upfront. Instead, you pay £28.99 ($34.99, AU$46) per month over a 24 month period. The deal includes a shiny new Series X console, access to over 100 games on Xbox Games Pass plus multiplayer gaming via Xbox Live Gold. You can pre-order the all-digital Xbox Series S on the same basis.

So, the rumours that claimed the Xbox Series X would cost $499 in the US were right. But then again, there was also plenty of talk of the Xbox costing significantly more. One supposed leak from a retail insider showed the Xbox Series X listed at an eye-watering $599. Thankfully, that's now been debunked.

If you're wondering how the price of the Series X compares to past Xbox consoles, here's a look back at historical Xbox pricing strategies...

Given that it costs the same as the original Xbox One (with the Kinect add-on), the Xbox Series X looks like very good value. After all, it is supposedly the most powerful games console ever...

Rumours circled for months that Microsoft was working on a cheaper Xbox to launch alongside the Series X, and now it's confirmed that they are true. The Xbox Series S is a digital-only version of its next-gen console in order to lower the barrier to entry.

Gamers in 12 countries, including the US, UK and Australia, will also get the option to pre-order the Series S and pay in instalments. Microsoft's Xbox All Access service gets you Series S console plus Game Pass Ultimate and Xbox Live Gold in return for £20.99 ($24.99, AU$33) per month over a 24 month period.

That's not to say the Series S is underpowered. Microsoft claims it will "deliver four times the processing power of an Xbox One console."

Lastly, Series S sports a 512GB SSD – half that of the Series X, which totes a 1TB SSD. Both consoles provide 1TB expansion cards and HDMI 2.1 sockets with support for Variable Refresh Rate.

The Xbox Series S is set to go head to head with Sony's PS5 Digital Edition, which is said to be a PS5 minus the disc drive. The Series S could also save you a fortune on games on disc. Publisher 2K has already announced that its upcoming basketball game NBA 2K21 will cost $70 in the US (£65) on the Xbox Series X, just as it will on the PS5. That's a full $10 more than on the previous generation of consoles. Expect $70 games to be the new normal for disc games, with digital downloads (hopefully) cheaper.

However, most of the first back sold out within days. More stock is said to be on the way, though. Here where to pre-order and the new Xbox Series X in your country:

Microsoft has also revealed more information on how and when Xbox fans can get their consoles via the Xbox All Access subscription.

As it turns out, the full-fat PS5 and Xbox Series X cost the same, although the all-digital Series S undercuts the PS5 Digital Edition by a fair margin of £90 ($100, AU$100).

Bear in mind, however, that the Xbox Series S is less powerful than the Series X, whereas the PS5 Digital Edition is identical to the standard PS5 except for the lack of a disc drive.

The Xbox Series X has a lot of exciting games confirmed for it but only the blockbuster titles will be offered as bundles.

Having said that, some of the biggest titles are usually partnered with a new console. This year's instalments include FIFA 21, Fortnite, Rainbow Six Siege and Assassin's Creed Valhalla, all of which are confirmed for the new console.

We know that Microsoft have teamed up with EA to bring over 60 of EA's biggest games to Xbox Game Pass Ultimate, which gives you access to 100+ games stored in the cloud.

Halo Infinite should would likely have been the most-wanted launch title, and the most popular bundle, but 343 Industries, the studio in charge of the game, recently announced that they had made the "difficult decision" to delay its release until 2021.

We can also expect the Xbox Series X and Series S to come bundled with accessories like wireless controllers and subscriptions to the online gaming platform Xbox Live. Stay tuned, and we'll bring you more as we get it.