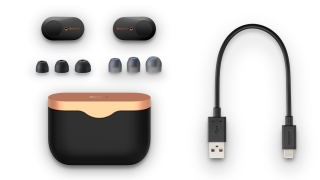 So, you’ve bought, or are considering buying, a pair of Sony’s brilliant WF-1000XM3 headphones, but how do you make sure you get the most out of these five-star wireless earbuds?

The world of true wireless earbuds has exploded in recent years. It was started by the Apple AirPods and many models have followed since across a range of prices. Arguably the best wireless earbuds you can currently buy, though, are the Sony WF-1000XM3.

As is the case with most wireless headphones, you can simply pair and play straight away if you choose, but the Sonys offer greater depth in terms of features and functions – and that is definitely worth investigating.

Just how do you get the best performance possible from the WF-1000XM3s? Is there anything you should consider before you commit to buy? Whether it's tips, tricks or nuggets of buying advice, or just help with some of the basics you want, you’ve come to the right place.

Open the carry case, remove the Sony earbuds and you automatically trigger the WF-1000XM3s' pairing mode, which is confirmed by a voice in each individual earbud. Go into the Bluetooth settings on your laptop or desktop computer or smartphone and you should see the WF-1000XM3 model number appear. Tap to connect and the voice inside the buds should confirm you’re connected and ready to listen to some tunes.

Alternatively, Android smartphone owners with NFC (Near Field Communication) can pop the headphones out of the case and place their phone near the NFC logo on the front of the Sony charging case.

Now, every time you take the headphones out of their case and put them in your ears you’ll hear a voice confirming the Bluetooth connection (and battery life). You can pair up to eight different devices with the Sonys – just go into the Bluetooth settings on the device you want to listen to and select the WF-1000XM3s if you want to change.

If you want to connect to a new device, there’s a simple way to kick-start the pairing process. Simply place the earbuds in your ears and place a finger on each touchpad. After seven seconds a voice should tell you the Bluetooth pairing process has started so you should be able to select them on your device.

To do a basic reset, place the earbuds in the case and hold your finger on the left touch sensor for 20 seconds. When the red indicator stops flashing repeat the process on the right earbud.

If you need to return the Sony's to their default factory settings, then the process is just as simple. Open the case, check each earpiece is showing a red LED and hold a finger on each of the touchpads simultaneously. After ten seconds, let go and the headphones should flash red before flashing blue four times. This indicates they’ve been restored to their original settings.

You should now be able to restart the pairing process from scratch.

The headphones come with a USB-C charging cable that plugs into the socket on the charging case. It’s quite a short cable, which can be a pain when your power sockets are close to the floor but any other USB-C cable should work just as well.

The only potential downside is that unlike the Apple Airpods or the Samsung Galaxy Buds Plus, the Sonys do not offer wireless charging. Perhaps that's something we could see on the WF-1000XM4, if Sony launches such a model in the future?

Once you’re connected via Bluetooth, the headphones are ready to go. However, if you want to access all their features and functionality, you’ll need to download the Sony Headphones Connect app for iOS and Android.

Through the app, you can access the built-in equaliser if you want to tweak their sound, enable Adaptive Sound and Ambient Sound features and even set the headphones up to play music encoded in the Sony 360 Reality Audio format. You can also prioritise connection quality over sound quality should you suffer any Bluetooth dropouts.

How to boost battery life for the Sony WF-1000XM3s

The battery life that you get from these wireless earbuds, like many models on the market, can vary depending on the features and functions you’re using.

Take Sony’s DSEE HX sound processor, which can be switched on or off via the Headphones Connect app. We think the WF-1000XM3s sound at their best and most detailed with this turned on, but the trade-off is that battery life is reduced to around three hours if you use this with the noise-cancelling and Ambient Sound features both enabled. Turn the DSEE HX processing off and you should get closer to the six hours that Sony claims.

Interestingly, the small print in the Sony manual mentions that if you don't use the headphones for a long time, battery life might shorten, but will then improve after a few extra recharges.

How to check the battery on the Sony WF-1000XM3s

Fire up the Headphones Connect app, look in the top right corner and you’ll see the remaining battery life for both left and right earbuds. You can also see how much juice is left in the carry case and whether or not you’ve enough to keep the headphones charging while you’re on the move.

Every time you use the earbuds, the voice guidance tells you the percentage of charge left, which also helps you keep tabs on battery life.

How to customise the Sony WF-1000XM3 touch controls

This is done through Sony’s Headphones Connect app. Beneath the ‘Change the touch sensor function’ section, you can see how the left and right touchpads are already set up.

Tap on the cog and you’ll be taken to a menu where you can flick between various functions and assign them to a particular earbud. For example, you could have the left sensor altering the volume, while the right sensor controls playback. If you want to assign one of the sensors to summon either Amazon Alexa or Google Assistant this can be done here too.

There are two options here. You can update the firmware on the headphones manually or automatically, but either way, you’ll need to go through Sony’s Headphones Connect app.

If you opt to update manually, you’ll be notified an update is available and be prompted to download it in the app before it can be transferred from your device to the earbuds. If you’ve selected automatic updates, any available firmware should download and transfer in the background.

As is the case with most firmware updates, whether it’s for headphones or smartphones, once the Sonys have been updated there’s no going back to a previous version. It can sometimes be worth waiting a few weeks and hitting the web to see if anyone has reported any potential issues.

Are the Sony WF-1000XM3s good for running and/or the gym?

One of the biggest potential problems for prospective owners is that despite the secure fit, the Sony WF-1000XM3s are not waterproof. In fact, they don't have an IPX certification.

While this shouldn’t be a problem for general use or the average commute, it does suggest you're better probably best keeping them away from prolonged exposure to water, whether it’s the odd bead of sweat from a bout of burpees or a torrential downpour while you’re out running.

Of course, there’s nothing to stop you trying them out, but you might want to consider a different pair from our list of the best sports headphones.

A 2019 What Hi-Fi? Award would suggest so. They’re the best-sounding true wireless earbuds we’ve heard to date, beating all rivals at this price, including the Apple AirPods Pros, Beats Powerbeats Pro, Amazon Echo Buds and Samsung Galaxy Buds Plus.

These Sonys started out life over £200 ($200/AU$300) but have slowly dropped in price to the point where you can find some excellent Sony WF-1000XM3 deals out there. And now that you're armed with all the vital tips and tricks you're in the perfect position to make a purchase.