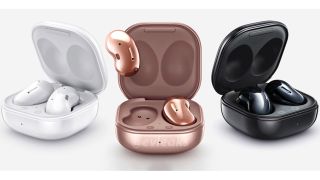 The Samsung Galaxy Buds, Galaxy Buds+ and Galaxy Buds Live sound similar but, like any modern family, this trio of true wireless earphones have their differences. So how do Samsung's wire-free wonders stack up in terms of features, price, spec and sound quality? Should you splash out on the futuristic, bean-shaped Buds Live? Or would you better off with the cheaper Galaxy Buds or Galaxy Buds Plus? Read on as we compare the line-up...

Samsung launched the first Galaxy wireless buds – the Galaxy Buds –  back in March 2019. At £139 ($149, AU$249), they were a touch cheaper than the Apple AirPods and offered easy connectivity for those with Samsung or Android phones.

Samsung quickly one-upped the Buds with the Galaxy Buds+, released at the start of 2020. Better battery life, Android/iOS compatibility and improved performance were the order of the day – along with a higher price tag.

Fast forward to August 2020 and the launch of the most advanced Galaxy Buds yet, the Galaxy Buds Live, featuring a compact jelly bean-esque design, active noise cancellation, improved voice controls and, yes, an even higher price tag.

Since all three generations of Galaxy Buds are still available to buy online, you can take your pick of the litter. But which earbuds offer the best bang for buck? Which sound best? Which have the best battery life? To help you buy the best buds, we've compared the strengths and weaknesses of each generation below...

The noise-cancelling Samsung Galaxy Buds Live come with the highest spec, which is reflected in their price. Expect to pay around £179 ($230, AU$330).

The second-generation Galaxy Buds Plus, which don't have noise-cancelling, are currently priced at £159 ($149, AU$299). However, we'd expect to see the price start to fall now the've been superseded by the newer model.

The first-generation Galaxy Buds would be an okay purchase if you can get them at the sub-£100 mark but they do have their weaknesses.

Battery life can be a dealbreaker when it comes to true wireless earbuds. After all, it's not like you can whip out a 3.5mm cable and continue to use them after the battery dies (as you can with some wireless headphones).

The Galaxy Buds Live give you up to 21 hours total playtime with active noise cancelling on; six hours from the buds themselves plus 15 hours from their charging case.

That said, If you're prepared to switch off the noise-cancelling and Bixby voice wake-up function, the Buds Live will latest a whopping 29 hours, making them some of the longest-lasting wireless buds we've tested so far.

The second-gen Galaxy Buds+ offer an impressive 11 hours playback per charge, plus an additional 11 hours from the charging case for a total of 22 hours. They also have the speediest fast-charge function: 60 mins play from 3 minutes' charge. (The Galaxy Buds Live offer 60 minutes of play from 5 minutes' charge).

As for the first-gen Galaxy Buds (58mAh), they offer just six hours' play, plus an additional seven hours from the charging case, making a total battery life of 11 hours.

Put simply, if you're after a pair of wireless buds with the longest battery life per charge, that award goes to the Galaxy Buds Plus. Although that's not to say the six hours offered by the Galaxy Buds Live won't be enough for most people.

Lastly, all three Buds feature Samsung's nifty ' Wireless PowerShare' feature, which allows users to charge their buds by placing them on the back of compatible Samsung devices, such the Galaxy S20 smartphone.

We were impressed with the design of first-generation Galaxy Buds. In our 2019 review, we said they functioned "seamlessly" (lifting them out of their case automatically activates pairing mode) and offered a comfortable fit (you get a choice of ear tips in the box)

The Buds Live are a different kettle of fish, though. They feature an inventive, jelly bean-shape design which allows the buds to rest inside your ears, without protruding. In the box, you'll find a choice of small or large wingtips to help with fit.

Overall, we think the Buds Live score the most style points. They are the cleverer, less intrusive design and come in a choice of soft-touch 'Mystic' finishes (white, bronze and black) to match Samsung's latest smartphones, including the Galaxy Note 20 and Galaxy Z Flip 5G.

If your budget stretches to the range-topping Galaxy Buds Live, you'll be rewarded with features galore. Let's start with the big one: active noise cancelling (ANC), which allows you to tune out the world around you. Samsung claims the tech will cancel out up to 97% of "low-band background noises" such as trains and busses. In practice the difference it makes is quite subtle but it does take the edge off certain sounds.

Splashing out on the Buds Live will also get you a host of other additions, including Samsung's own Scalable codec, which ensures consistent, high-quality audio streaming when the Bluetooth signal is weak, as well as Game Mode and Buds Together, so you can split buds with a friend and share music in mono.

If noise-cancelling isn't a must-have, then you the Buds+ might suit your needs and save you some cash. They share plenty of features with the Buds Live, including Spotify integration (for Android users), Find My Earbuds, iOS compatibility and three microphones for crisp call quality.

The original Buds offer the fewest features. You only get two microphones meaning call quality isn't as good in loud environments, sound customisation options are limited.

And while all three buds pair with Samsung's Galaxy Wearable app, which lets you check battery status, personalise the EQ settings, set up the buds to read out notifications, and locate the buds if you lose them, the first-generation Buds only pair with the Android version of the app.

If you use an iPhone, give the Buds a miss and opt for the Buds+ or Buds Live instead.

True wireless earbuds have come a long way in the last couple of years, which is reflected in much higher expectations when it comes to sound quality. So, how do the three buds compare, sonically speaking?

The first-generation Galaxy Buds feature a one-way dynamic speaker. They offer decent clarity, but lack warmth, transparency and refinement. In our review, we found their sonic performance to be similar to that of the three-star Apple AirPods (2019).

Since launch, the Galaxy Buds have dropped considerably in price. At under £100, they're decent performers for money – just don't expect to blown away by their sonic abilities. If you're on a tight budget, there are other wireless earbuds that deserve to be on your shortlist.

The second-generation Galaxy Buds Plus feature a two-way dynamic speaker (woofer and tweeter) and deliver a noticeable step up in audio quality. They produce an open and expansive sound with a decent sense of scale, weighty bass and good balance. On the downside, they lack timing and detail.

In isolation, the Galaxy Buds+ are good performers. But put them up against similarly-priced rivals, such as the five-star Sony WF-1000XM3s, and there's no contest.

The Galaxy Buds Live deliver an impressive amount of bass given their non-intrusive design and they promote a more open and spacious sound than their siblings too.

Samsung has very much played to its audience here, creating three pairs of well-featured true wireless earbuds that offer inventive tech and good usability. Which buds you choose will come down to personal taste, the particular features you're after and budget.

If you can afford to splash out the extra money, the bean-shaped Galaxy Buds Live offer a fantastic mix of cutting-edge features, noise cancelling, responsive voice controls and good battery life – all wrapped in compact, discrete design.

If it doesn't stretch, or you don't see the value in the noise cancelling technology, the Galaxy Buds+ should be top of your list. They share many of the high-spec features, including the Galaxy Wearable app, excellent battery life, a lightweight design and iOS/Android compatibility.

Prefer to bag a bargain? Provided you're willing to live with a drop in performance, the Galaxy Buds are a decent option for those on a strict budget, but you are sacrificing quite a bit in terms of sound quality.