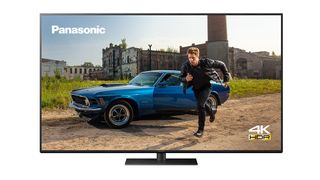 It's a big year for Panasonic, what with it being a worldwide partner of the Tokyo 2020 Olympic and Paralympic Games. And the Japanese giant's TV division has started it confidently by unveiling its flagship HZ2000 OLED at CES 2020 and the rest of its 4K OLED and LCD line-up at its more recent European event.

The newcomers have big shoes to fill. Every 2019 Panasonic TV we reviewed, we were impressed by – and we even called the top-tier GZ2000 OLED "the TV by which all others can be measured".

That bodes well for Panasonic's new generation of TVs, especially as, naturally, the company has evolved them over last year's models with improvements in picture, sound and features.

So what's new for Panasonic 2020 TVs? Allow us to run down the specs, features and differences for all the models...

Panasonic has announced three OLED TV ranges to succeed the four from last year. The HZ2000, HS1500 and HZ1000 series each come in 55in and 65in sizes and share a lot in common.

Like the 2019 OLEDs, every 2020 OLED (and LCD, for that matter) boasts support for HDR10+, Dolby Vision and Dolby Atmos. This year's OLEDs also support the two big headline TV features introduced at CES in January – Dolby Vision IQ and Filmmaker Mode too.

Dolby Vision IQ works to optimise Dolby Vision content on your TV according to the brightness of the room, while Filmmaker Mode overrides the TV's processing (such as motion smoothing and detail enhancement) to allow content to be displayed at the aspect ratio, colour and frame rate intended by the content’s creator.

While LG has also pledged support for the two technologies, Panasonic has implemented its own unique application of Filmmaker Mode by adding ‘Intelligent Sensing’, which dynamically adjusts HDR10+, HDR10, HLG or SDR pictures based on the lighting in your room. Panasonic is keen to point out that it doesn't just adjust the luminance, it 'intelligently' compensates saturation, optimises the gamma in the brightest areas and adds luminance.

Essentially, both aim to adjust picture performance according to the lighting conditions of your room so that, for example, dark scenes don't look too dark in brightly lit environments.

As far as support for industry modes goes, Panasonic is also hoping to enable a firmware update for Netflix Calibration later in the year.

The 2020 OLEDs sport a next-gen processor and next-gen, LG-sourced panel, as is expected. The HZ2000 differentiates itself from its siblings with Panasonic’s superior custom-made Master HDR OLED Professional Edition panel, which promises 20 per cent higher average and peak brightness capabilities over the panel found in the HZ1500 and HZ1000. It has a more advanced processor, the HCX Pro Intelligent, than the two ranges below it, too.

Fittingly in time for the Tokyo Olympics 2020, motion handling has been improved on this year’s OLEDs thanks to a more complex implementation of black frame insertion. While typically OLED TVs using this technique insert a black frame in between each frame of moving content, the new Panasonic OLEDs dynamically adjust the duration of the black frame to find a ‘sweet spot’ to ultimately, Panasonic says, enhance smoothness while reducing the flicker effect.

Panasonic has been more generous in the sound department this year too. Whereas the GZ2000 was the only range of last year’s to boast built-in upward-firing drivers for effectively delivering Dolby Atmos soundtracks, this year that benefit extends further down the line to the HZ1500.

And lastly, Panasonic is bringing back the swivel stand! The HZ1500 and HZ1000 OLEDs feature a swivel pedestal, allowing viewers to angle the screen freely towards their viewing position.

OLEDs may have sat pretty at the top of Panasonic's line-ups for some years now, but its 2020 TV line-up wouldn’t be complete without LCD TVs. There are three new 4K LCD ranges this year – 13 models spanning 40in and 75in screen sizes.

Representing the company’s pinnacle LCD performance, the HX940 also boasts a faster (100Hz) screen refresh rate, as well as the HCX Pro Intelligent processor (as opposed to a HCX one in the HX800 and HX900).

Panasonic’s Local Dimming Intelligent Pro is also onboard to improve contrast by adjusting the backlight and LCD shutters themselves – essentially mimicking the operation of thousands of virtual local dimming zones.

Last but not least, the HX940 and HX900 feature Panasonic’s two-way stands that allow owners to position the two pedestal feet in either a central position, or on the edge of the TV so that it can be easily placed on either a wide or narrow tabletop.

Every OLED and LCD TV will sport the latest version of Panasonic's smart TV OS. My Home Screen 5.0 brings some small usability improvements to the table. For example, when the owner hovers over the icon of a supported streaming service (such as Netflix and YouTube) recommended titles will pop up in a bar above it for easier access to popular shows.

The TVs also support the HbbTV Operator App (except in UK). In 2019 Panasonic TVs announced world’s first support for HD+ and expanded support to M7 via a firmware update. In 2020, Panasonic will continue to support both HD+ and M7.

The free, global XUMO streaming service, which delivers both over-the-air and over-the-top channels, also comes to this year's models.

Finally, Google Assistant and Amazon Alexa support is across the board, allowing users to operate some TV functions – like app launching – simply by using their voice.

Panasonic's 'Hollywood to your Home' tagline for its OLEDs is rooted in the fact they are used in many studios and post-production houses in Hollywood and throughout the world. And because of that it not only wants to satisfy consumers like you and I but also working industry professionals who are using the TVs to help them, for example, grade colour for films. To that end, the 2020 OLED TVs Panasonic have two new features, supposedly requested from the post-production community in Hollywood and beyond.

Firstly, tone-mapping – essentially how the TV handles HDR highlights that are too bright for it to display – can now be turned off in the menus, giving professionals more scope to work on the source content right the way up until it hits the native brightness of the panel, as opposed to the level the TV would normally 'clip' it at.

And secondly, Panasonic has introduced the “world’s lowest” calibration points at 1.3 percent and 0.5 percent, so that professionals and enthusiasts alike can achieve a more nuanced transition from pitch-black to just above black.