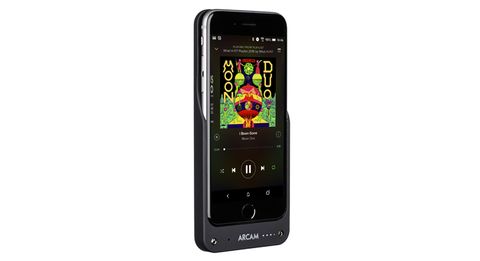 Arcam’s DAC/amp/battery pack combination is a clever companion for your iPhone, but two units have developed the same fault

Forget death and taxes, the two things you can be certain of are the need for better quality music and your Apple iPhone’s battery depleting quicker than a jug of Pimm’s at Wimbledon.

Wouldn’t it be great if someone made a device that addressed both at the same time?

Arcam has done just that. The MusicBoost S is a portable headphone amplifier, DAC and battery pack that fits your iPhone like a glove – for the reasonable price of £99 (it's had a price cut from £120).

It is designed specifically for the Apple iPhone 6 and iPhone 6S, but considering there are of course tens of millions of those smartphones in use, it’s not as niche as you might think.

The original MusicBoost was designed with only the iPhone 6 in mind, and while Arcam claimed it would also fit the 6S, it was a struggle to free it from the case. The fit was far too tight, even with the iPhone 6.

With the updated model mentioning both iPhone models on the box, and taking into account the extra thickness of the 6S, the new MusicBoost S is a much better fit for both.

You still have to apply a fair amount of pressure to release the iPhone, but it's a lot easier to slide out. (Tip: place one thumb near the iPhone’s home button and the other right at the top).

The soft-touch finish makes it nice to hold, and the iPhone sits snug and secure in the case. The build quality is solid and durable, and essentially it feels rather like a luxury item in your hand.

But the MusicBoost S makes the iPhone bulkier, forcing you to adjust your hold on the phone when texting or playing games. It’s also wider and heavier to carry around.

You’ll have to ditch your iPhone’s protective case too, although the Arcam isn’t exactly the best substitute.

While the camera and bottom edge are covered, the top and both sides of the phone are left exposed so you can access the volume and power buttons. That won’t be enough to protect your precious iPhone if you do happen to drop it.

Another annoyance is that the Arcam stops the in-line mic and remote controls on your headphones from working, as they're no longer going straight into the iPhone’s 3.5mm port. The MusicBoost S connects to the iPhone via the Lightning connector, and has its own, separate headphone jack.

If you’re committed to using the MusicBoost S, you’ll have to forfeit being able to change volume, skip tracks or take calls via your headphones.

But it might just be worth all that hassle, as the best part of the Arcam (at least in theory) is that battery pack. Arcam claims it will provide 120 per cent extra battery life – which in the real world equates to a full charge when your iPhone is on its last legs – and leaves enough left over to keep powering the DAC.

It’s a quick charger, too. Our iPhone 6S went from 10 to 40 per cent in just half an hour, which is handy when your phone is fast running down the red bar.

After an hour and a half, we were back up to 90 per cent. That’s a godsend for iPhone users.

But we hit a snag: after a week's use the charging function failed on both the test samples we were sent, so there seems to be a quality control issue there.

You don’t have to keep it charging, either. You can turn the charger on or off by pressing the left button on the MusicBoost S.

If your iPhone’s battery is full, there’s no need to sap the back-up battery while listening to music. Press the button on the right to check battery status, and four LED lights indicate how much charge is left on the Arcam.

You’ll also find a 3.5mm headphone port, a micro USB for charging, and speaker grilles that mirror the iPhone’s placed at the bottom edge of the MusicBoost S.

But does the Arcam actually make the iPhone sound better? Plug in your favourite pair of headphones, and you’ll find a richer, more precise presentation.

Whether you’re playing Spotify streams or FLAC files, there’s a greater sense of weight and solidity to the sound.

Basslines have more impact and go deeper on David Bowie’s Lazarus, and the Arcam does a better job at defining the stop and start of notes than the iPhone alone.

Guitar strums are more raunchy and articulate, and there’s more space between the instruments too.

The resulting sound is louder and more full-bodied through the Arcam, which is plenty enough reason to give it a go. The one caveat is that you lose some of the iPhone’s natural ability to make music flow effortlessly.

That agile, delicate sense of rhythm we love is traded off for more oomph. Fiona Apple’s lilting voice on Every Single Night is melodic and expressive through the iPhone’s own DAC, bolder but not quite as musical through the Arcam.

We like the thinking behind the Arcam MusicBoost S. We can’t think of a more elegant way of sprucing up the sound quality of your iPhone.

Using something like the Oppo HA-2 or Audioquest DragonFly with your smartphone means carrying an extra device and a cable. Far too messy.

The Arcam isn’t perfect, however, and there are compromises to be made if you decide to use it. The sound quality is a decent jump up from the iPhone, it's just a shame that the charging function didn't work as well as we'd hoped. If Arcam can fix that, it has a good product.

The Arcam MusicBoost S originally received four stars in the September 2016 issue of the magazine. However, we encountered some problems after using it for a longer period of time, which are reflected in this review and the lower star rating.