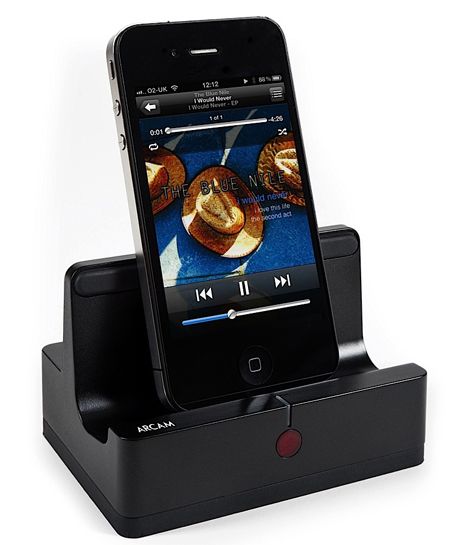 The drDock may be a niche product, but its good performance and flexibility with both music and video make it a great partner for your system

iPads and other tablets are on the rise, and the hi-fi world is taking notice. With their smart looks and interface, not to mention ever-increasing storage capacity, smart tablets such as the iPad are a natural place for storing your digital music and videos, along with the existing iPods and iPhones.

However, while it’s easy enough to explore all your media on your Apple device, even the slick new iPad isn’t the best option in terms of outright sound quality.

So what if you want better quality sound from the music stored on your portable, but want something more capable than a dock system? The obvious solution is to connect it straight into your traditional hi-fi.

Enter the Arcam drDock. It’s a compact digital docking device that delivers music and videos stored on iPads, iPods and iPhones to your system. It builds on Arcam’s previous irDock (£150) by now being compatible with iPads. Like the irDock, the drDock isn’t a standalone product – it needs separate speakers and amplification.

It has been through significant cosmetic surgery to accommodate the iPad: the irDock had a recessed dip that only supported the shape of iPods and iPhones, whereas the new drDock has been redesigned to allow iPads to slot into the same space as other Apple devices.

You might immediately wonder if the rather small dock will support the weight and shape of the larger iPad, but rest assured: it's sturdily built out of aluminium and more than strong enough to hold the iPad in place, without ever worrying if it’ll tip over. Furthermore, it has a uniform rubber base that gives it better grip and stability on most surfaces.

The connections are housed on the rear panel, and comprise left/right analogue outputs to feed the music from your iDevice into your amplifier; a coaxial digital audio output for transmitting; a control port for connecting to other Arcam products; and a mains socket that has been changed to double up as a USB connection.

The latter is handy because it means your iDevice can sync with iTunes on your computer when connected this way. The USB connection will charge your iPhone or iPod, but not your iPad – to charge the latter, the dock must be connected to the mains.

The option to turn the charging off (which the irDock had, as Arcam claimed that constantly charging the battery was bad for it) is missing from the drDock, however.

Elsewhere, Arcam has also upgraded the dock’s video connections, with an HDMI output replacing the S-Video and composite video outputs found on the irDock.

The HDMI port outputs audio and video from your iDevice, while the coaxial digital output lets you connect to an external DAC such as the Arcam rDAC if you want to to improve the sound quality even further.

The drDock can also be controlled by Arcam Solo products, plus many Arcam AV receivers and the T32 DAB tuner, when connected using the supplied RS232 lead

The supplied remote remains a tiny rectangle with buttons that are intuitively placed, but rather awkward to use. You can use it to flick between the menus on your iPod/iPhone, but the controller isn’t very responsive, and can be frustrating when manipulating the slicker interface of your iDevice.

The simple versatility of the updated connections makes the drDock easy to use. Streaming stored movies or YouTube videos from your device to your TV is steady and uninterrupted; standard-def picture quality is relatively decent, with HD videos faring better with cleaner picture.

While we wish some of the menu controls or the iPad’s interface were displayed on your TV screen instead of staying blank when a video isn’t playing, it’s nevertheless a great way to watch movies as a group rather than huddling around an iPad. We played an HD clip of the London 2012 Olympics opening ceremony and it was comfortable and fun to watch.

Switch to playing music, and the drDock does a fine job of fitting in with existing hi-fi systems. We played Enterprising Young Men by Micahel Giacchino from Star Trek and the drDock delivered the epic score with plenty of power, dynamism and punch.

There’s enough attack and detail across the frequencies to make the drDock sound authoritative and solid, and the instruments are well separated within a fairly open soundfield. All this makes the soaring music sound exciting and dramatic – turn the volume on your amp up and you’ll find the drDock stays in control of the music when things get demanding.

Play a more vocal-driven song, such as Jeff Buckley’s Hallelujah, and the drDock delivers plenty of detail showing up the nuances in his voice, while the guitar’s harmonics sound wonderfully melodic and detailed.

It might look like an unassuming product, the drDock is a versatile and capable digital dock – and if you’re an Apple user, it would be a great addition to your existing hi-fi system.

See all our iPod dock reviews