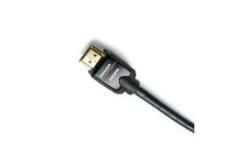 It's supremely cheap, but not at all cheerful

At just under a fiver, this budget cable from net merchants Amazon is as cheap as chips. It feels it too, with a thin cord and own-brand plugs.

Initially, we found the Basics to be a bright, punchy and detailed performer. However, further watching showed contrast up, and tones as vivid and day-glo, plus there were issues with motion handling and noise.

The sound, too, was hard and thin with a lack of dynamics, punch or subtlety.

What saves this cable is its price – but aside from that, little else appeals.