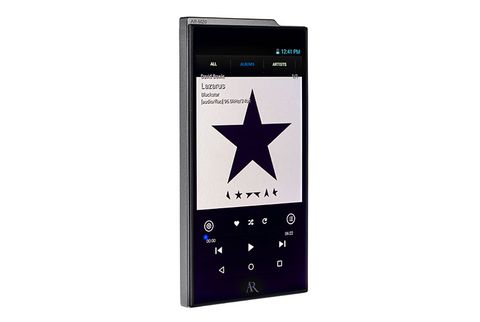 If hi-res music players such as the Award-winning Astell & Kern AK70 or the Onkyo DP-X1 can be considered Jack-of-all-trades in the market – the former for its ability as a digital-to-analogue converter, the latter for its extensive smartphone-mirroring Android experience – you could perhaps call the Acoustic Research AR-M20 more a master of one.

As a straight-up, all-singing-no-dancing dedicated music player aimed at indomitable purists and anyone firmly rooted in ‘less is more’ minimalism, the M20 is focused fully on the task in hand.

MORE: DACs – everything you need to know

Based on, and sitting under, the brand’s £900 M2 (which we labelled ‘the best-sounding portable music player we’ve heard’ back in 2015), the only zero the M20 adds is to its big brother's model number. The M20 is priced to compete with more affordable competition from fellow music player purveyors Onkyo, Pioneer, Sony and Astell & Kern.

Essentially it aims to deliver the bulk of the M2’s talented, audio-focused design while shaving a useful chunk off the price – a sensible move when people are questioning the need for two devices in their pocket.

The built-in memory has been halved from 64GB to 32GB – a difference of around 640 (CD-quality WAV) tracks. That may seem a little meagre by today’s expectations, but it can be expanded by up as much as 200GB thanks to its micro SD card slot.

Despite the M20’s 3150mAh battery losing the numbers game to the M2’s 4200mAh version, Acoustic Research says this more affordable model actually delivers 16 hours of playback – almost twice as much as the M2’s quoted figure.

Volume levels help determine battery stamina, mind you, so when we play Jack White’s latest Acoustic Recordings 1998-2016 album loud and on repeat, we clock around 12 hours from a single charge.

Clearly from the same gene pool as the M2, the M20 is an elegant, albeit ergonomically awkward, straight-edged slab of aluminium not dissimilar to Sony Xperia smartphones. This is a trimmer, more hand- and pocket-friendly version than its big brother, though, thanks to its slightly thinner, lighter proportions.

We didn’t feel the M2 was quite the finished article, what with its easily nudgeable volume wheel and lack of full Android experience. While the former issue has been resolved in the M20 ­– to keep costs down, standard volume buttons on the right-hand side-panel replace the potentiometer volume dial found on the M2 – we still find the M20 bare on the features front.

While Android-powered rivals like the Onkyo DP-X1 offer an all-embracing Android experience, the Acoustic Research’s interface, like the aforementioned A&K’s, is severely stripped back.

The operating system naturally includes Bluetooth for wireless playback through headphones and speakers, wi-fi for web-browsing via a pull-down tab, while the Spotify app looks exotic next to the more mundane clock, folder and settings utilities.

Bereft of the OS's usual gateway to Google apps and access to Google’s Play Store, however, only a third of the menu interface and 5in screen is taken up.

Seemingly reluctant to keep your fingers busy and your attention elsewhere while you listen, the M20 will probably be the last device in your pocket to promote procrastination. The silver lining: you don’t have to sift through bloatware and you can focus on your music - which, by the way, you’ll find within the AR Music Player app.

While we appreciate Acoustic Research designing its own software ‘to achieve high-quality sound… far beyond the framework of the Android OS’, and consequently can accept its interface being more functional than flash, what proves off-putting is its tendency to crash now and again. Not ideal when you’re deep into library-browsing.

It’s a good job, then, the M20 commands your interest in other ways.

We blast our lugholes with Jack White’s acoustic rendition of his Blunderbuss album hit, Love Interruption (at both sensible and not-so-sensible volumes) and the weighty, solid and muscular sound we remember from the M2 returns to breathe a sense of ominous anticipation into the track’s opening sombre guitar plucks and suggestive electric keys.

The greater breathing-space its presentation has over the A&K AK70 is demonstrated between White's and Ruby Amanfu’s vocals, as well as amid the acoustic strumming and bookending clarinet melody. It conjures a more palpable stereo image.

And having opened up the canvas between your ears, it finishes the job by filling each corner of it with fine and insightful detail, so you’re agreeably coerced into paying as much attention to the vocalists’ quirky delivery as to the plentiful instrumental textures surrounding them.

While the M20’s delivery draws you into a track more forcibly than the politer A&K, the rival does more to keep you there thanks to its greater, and as a result more involving, rhythmic, dynamic and timing know-how.

We play Elvis Costello & The Attractions’ This Year’s Girl and the syncopated drums sit more coherently together through the A&K, their dynamics more at liberty to vary.

Acoustic Research claims the M20 can deliver ‘10 to 20 times’ the power output of hi-res players from the likes of Astell & Kern and Sony, in an effort to deliver better compatibility and performance with high-end headphones.

Indeed, it proves comfortable driving a combination of cans from our cupboard, from the Sennheiser Momentum 2.0s (£270) and Grado SR325es (£280) to the B&W P9 Signatures (£700) – arguably the calibre of headphones most likely to bring the best from the M20.

Not everyone will see eye-to-eye with Acoustic Research’s utilitarian approach to features and user experience.

However, in a portable music player market struggling against the ubiquity of the smartphone, it’s hard not to get on board with its mission to prioritise sound.

With this in mind, the AR-M20 is no doubt a more sensible option than the M2, and succeeds in offering broadly similar performance from a similarly impressive-looking device at a lower cost. Even if we do find ourselves toe-tapping a little more fervently along to our Award-winner.

See all our Acoustic Research reviews