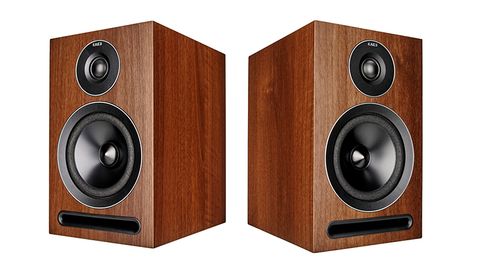 Appealing in more ways than one, the 101s are a good buy

The hi-fi industry isn’t short of speakers around £250 – quite the opposite, in fact. A handful of brands rule the roost at the budget end, the likes of Wharfedale, Dali, Cambridge Audio and Q Acoustics topping the pile.

Some years ago we’d have added Acoustic Energy to that list, but the British company has dropped off the radar somewhat.

We’re told the company is currently undergoing changes – it’s being ‘re-energised’ at the business end – so we are rubbing our hands at the prospect of new products, including these Acoustic Energy 101 standmounts.

The 101s are one of the brand’s more recent offerings and the smallest member of its entry-level 1-Series. Acoustic Energy says the range has evolved from the mid-range 3-Series, so the 101s owe their heritage to their five-star elders, the 301s.

From technical to aesthetic design, the influences are clear: they share the same 28mm fabric dome tweeter and 11cm aluminium cone mid/bass driver. The likeness is uncanny.

Acoustic Energy has preserved its classic design, though the straight-edged boxes are neatly finished with black ash or walnut veneers, instead of the 301s’ glossy ones. Little touches like the silver trim on the driver cones and the silver ‘AE’ badge neatly tucked inside add a touch of class.

The cabinets are compact enough to occupy shelf space, though sitting them atop dedicated stands such as the Atacama Moseco 6s (£120) should ensure you get the best performance from them.

Like the 301s, they have a front-facing slot-ported arrangement, designed to control air turbulence and allow for flexible positioning.

It seems to work: the 101s perform well both in the middle of a room or close to a rear wall (though the latter brings more solidity to the presentation), and toeing in isn’t compulsory for a good stereo image.

The resemblances continue into performance too. The 101s sound clean and crisp, their presentation tonally balanced and nicely refined. Consistently pleasing across the frequencies, they relish in clear and articulate mids, crisp highs and taut, agile lows.

For the 101s’ size, the bass on offer in Supertramp’s Give A Little Bit takes us by surprise. It’s deep, tuneful and does its bit to help drive the song rhythmically.

Generous bass levels can sometimes hamper pace and tempo, but that isn’t the case here: the 101s employ bite and energy where needed. Strings are enthusiastic, while the chorus is delivered with gusto.

Move onto Old Friends from The Hobbit: An Unexpected Journey soundtrack and, dynamically, the 101s are determined to do right by both the quieter thematic woodwinds and more severe strings.

Subtle shifts are distinct, and climaxes are given due welly. It’s an engaging piece of music and the 101s do enough to rope you in.

The Acoustic Energys aren’t the weightiest or richest speakers we’ve heard – their temperament favouring the lean side of neutral – so avoid partnering them with similarly thin-sounding kit.

As a pair of speakers, they really are very good, but the competition is the toughest it’s ever been and ‘very good’ won’t necessarily grant you access to the five-star club.

Still, if the 101s are a sign of things to come from Acoustic Energy, we’re positively encouraged.

Read all our Acoustic Energy news and reviews