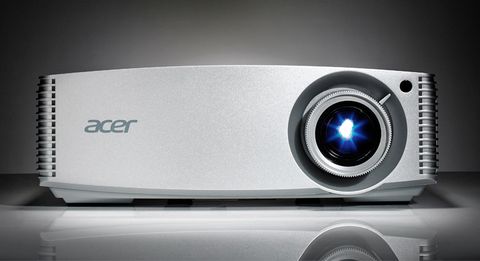 Good, but not great. We expect more from this flagship model

After starting out in the PC market Acer decided to spread its wings, becoming a respected brand in the world of smartphones and tablets, while most recently it made a brave foray into wearable technology.

Along with all that, the company is known to produce projectors as well – and here we have the flagship model in its new ‘home’ range.

First impressions are good. The unit has a luxurious white-gloss finish and there are plenty of connection options.

Most rivals have one or two HDMI inputs, but the Acer has three: handy if you’re bypassing a home cinema amp and connecting sources directly into your projector. There’s a host of analogue connections too (like VGA inputs for laptops), and the potential for wireless playback by means of an optional wireless adapter (not included), which plugs into one of two USB sockets.

The spare USB allows for playback of media files stored on a stick, while DNLA functionality allows you access files over your network via the projector’s LAN input. The ‘media’ hub interface is nothing flashy, but it is easy to follow.

With only a six-watt output from the built-in speakers, it’s little wonder the Acer’s sound is restricted and unable to reach the same volume of rivals, but then again you won’t have to worry about fan noise - it's a polite purr (though you will have to sit close by to hear movies clearly).

It takes a few minutes longer than usual to get up-and-running – partly due to the lack of adjustable feet on the Acer, which can make positioning a little tricky (especially when the projector is placed in a lower position than the screen).

The remote control is also a bugbear: it fits well in hand, but is a pain to use due to its illogical layout (the ‘enter’ button is in a strange position, to say the least). Even on our second day of testing we couldn’t get used to it and resorted to the projector’s buttons instead.

We’re pleased to report the H9505BD performs consistently with Blu-ray, DVD and 3D content. It’s capable of a clear, bright ­(thanks to its 3000 lumens) picture - edges are crisp, if not quite as sharp as the best.

We play TT3D: Closer to the Edge on Blu-ray and the Acer shows respectable contrast: white details on bikes, and the black biker-jackets are convincing.

Motion is mostly smooth - you have to put the Acer through fast-paced scenes to notice it’s a little rougher round the edges than the Epson EH-TW6600 or BenQ W1500.

The Acer's colour rendition is far from washed-out, but colours don’t have that ‘pop’ factor, or enough subtlety to convince.

The same flaw applies with detail. The H9505BD’s efforts are decent, but more subtlety is needed for it to compete with the very best.

Play the same film in 3D and, again, the picture becomes a little messy when motion is involved. As the racing starts, there’s noticeable blur as bikes whizz by and the camera zooms in on the action. It’s not so bad as to hinder our enjoyment, but it is noticeable.

The Acer has its qualities: connections are decent, finish is above par and picture quality wins points for good clarity and brightness.

Unfortunately, rivals best the H9505BD on performance at almost every other turn.