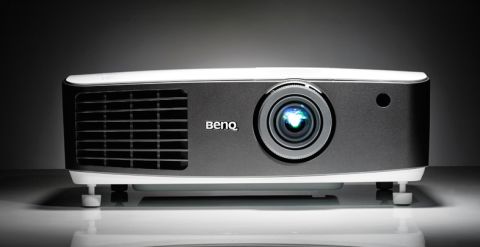 The W1500 is the next model up from the current Award-winning W1400 in BenQ’s ‘W’ series – so it comes with plenty of expectation ahead of our test. It copes with the burden admirably.

Although not a class-leader like its smaller sibling (as the four stars awarded here shows), the W1500 maintains high standards. Picture quality packs clarity and naturalness, while features are befitting the price tag.

However, the W1500’s wireless ability helps justify the extra spend. With the supplied transmitter plugged into an HDMI input of a compatible source (a Blu-ray player or gaming console, say), the projector can beam its picture to a screen without wires. It’s easy to set up, too.

If you do prefer a physical connection, then there are plenty: twin HDMI inputs (helpfully located on the left-hand side for easy access) a mini-USB, PC, component, RCA inputs, and a 3.5mm input and output.

The white glossy shell of the W1500 is a nice, clean finish, while its compact build allows it sit on a small table and provides mobility.

The short-throw projector gives you a screen size up to 84in at 2m, so it is ideal for small rooms where the projector and screen need to be close to one another (of course the zoom offers leeway here).

The toggle behind the lens controls the zoom, while a gap through the casework to the lens shaft allows you adjust focus. A panel (hiding a fiddly knob) controls lens shift. However the menu does provide a grid test-pattern, which is handy squaring the picture to the screen.

The remote control keys for picture adjustment are nifty shortcuts during set-up, although we’d like bigger menus here.

The W1500 has all the right performance assets at this price point: it’s bright and controlled, with good insight and solid colours.

If you turn ‘Brilliant Colour’ mode off for less saturated hues and change colour temperature to ‘Natural’, you’ll find the most even tone, with realism and depth. It’s not as eye-catching as the Epson EH-TW6600, yet we find the BenQ convincing. Skin tones are impressive, while true blacks and vivid whites make for exemplary contrast.

Load the penultimate instalment of Harry Potter on Blu-ray and, as the battle on the broomsticks takes off, the BenQ doesn’t miss a beat – as the camera twists to keep up, the picture remains smooth and coherent.

Even in low-light scenes, it shows a good eye for detail. When it comes to 3D, the BenQ is clear, stable and with plenty of depth, making it a very enjoyable watch.

Finally, we turn to The Grand Budapest Hotel on DVD and the W1500 maintains its standards, losing only the sharpness you’d expect with the resolution drop. With striking aesthetics and vivid colours, this film is a good test. The BenQ complies happily: colours are deep and rich.

Detail is decent too: opulent upholstery has texture, while the abundance of close-ups are revealing (although rivals prove, perhaps, a touch more insightful).

When it comes to sound the BenQ is clear, goes reasonably loud (fan noise being no more than a gentle whir) and, surprisingly, has a decent amount of body. For TV viewing or gaming, it will suit your needs.

The W1500 can’t quite muster enough punch or subtlety of the Epson EH-TW6600, but there’s no doubting its appeal: a decent all-round performance (good detail and a natural palette), a compact build, easy to use and with the option of a wireless connection.

There’s plenty here for us to recommend the BenQ.