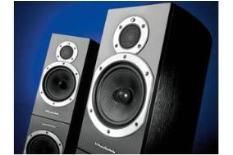 The Diamonds had a good innings as five-star speakers, but fresh competition now offers more for the money

Such was our admiration for these Wharfedale bookshelf speakers that we gave them a 2009 What Hi-Fi? Sound And Vision Award, and handed them a highly-coveted Product Of The Year gong in our ‘Stereo Speakers & Subwoofers' category.

At the time we said that the 10.1s were arguably Wharfedale's ‘best [budget speaker] yet' and that they could make ‘price comparable speakers and most from the price class above sound a little vague.' We were huge fans.

Mature sound for the money
From a design perspective, although the Wharfedales don't have the polished appearance of Monitor Audio's Bronze BX2s and feel cheaper in the flesh, their design isn't exactly drab.

The Diamonds boast a curved cabinet, which helps to minimise unwanted internal interference, and even the surround of the Kevlar mid/bass driver has a moulded pattern to help reduce the effects of standing waves.

Consequently, the Wharfedales produce a surprisingly mature sound for the money. Listen to Ellie Goulding's Starry Eyed and her dulcet tones are beautifully reproduced in a sweet-sounding and natural manner.

The track flows along smoothly and the speakers display a great sense of timing; there's a neatness and simplicity to the delivery that makes the Wharfedales extremely easy to listen to.

The fact that you don't find yourself drawn to either the bass or treble of these speakers is testament to their even tonal balance.

Integration between the Kevlar mid/bass driver and the soft dome tweeter is seamless, leading to a cohesive sound – and it's this consistency across the frequency range that gives the Wharfedales a slight edge over some of their rivals.

Versatile and ready to do justice
On the whole, the 10.1s are versatile enough to do justice to a wide variety of music, and they're relatively unfussy about positioning, too.

Even with the twin, rear-firing bass ports, low frequencies stay relatively taut when the speakers are up against a wall – there's a slight loss of cohesion and stereo imaging, but nothing too serious.

Every aspect of their delivery is controlled, but not to the point where music feels held back. The leading edges of notes are presented confidently and with precision.

While you can't argue with the level of control and transparency on offer, it has to be said that the 10.1s don't quite match the leading rivals for excitement.

The sense of scale and grandeur when faced with a heavyweight classical track such as The Battle taken from the Gladiator OST doesn't have the same impact as it does when heard through the likes of the the class leaders.

There's still plenty to admire in the way the Diamond 10.1s perform, but the emergence of some seriously talented rivals – such as the Arcaydis DM1 and Monitor Audio BX2 – has slightly taken the shine off this Award-winning speaker.

Watch our Awards video of the Wharfedale Diamond 10.1