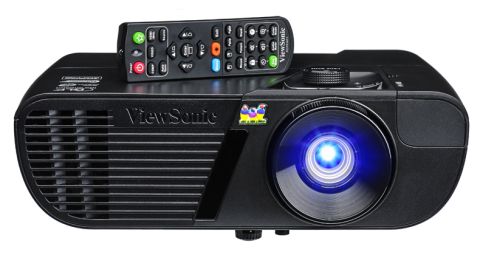 An affordable and accessible way to get super-sized entertainment

Those in the market for a new budget home cinema display should ask themselves one question – what matters most: sharpness or size?

Do you get a 40-something inch 4K TV, or a Full HD projector with less resolution, but which is capable of six or seven times the image size?

At this modest price, the ‘best of both worlds’ scenario doesn’t currently exist. Bigger 4K tellies and the limited 4K projector offering available right now will set you back thousands.

To quote Neo from The Matrix, “the problem is choice”.

Those who opt for size may well plump for something like the ViewSonic LightStream Pro7827HD.

ViewSonic clearly knows that budget projectors are often destined to become nomads, moving from room to room, even house to house, so the LightStream Pro7827HD’s smart, all-black shell is small enough to comfortably tuck under an arm.

It will sit as easily on a coffee table or on a bookshelf as in an AV rack.

The set-up process won’t put you off moving it around, either. Using its on-unit controls, it’s dead simple to project an image of up to a maximum 300in on to your screen or, only if you really have to, wall.

Zoom and focus can be adjusted on the lens itself, and there’s a dial for vertical lens shift, which means you shouldn’t have to resort to resting it on a pile of magazines.

If the picture is askew, exhaustive keystone correction options can be found in the menu using the half-sized remote; we just wish it had backlit buttons.

There’s no bias against small rooms, either. With a 1.1-1.5 throw ratio, the ViewSonic is capable of beaming a 100in image from eight feet away, for example.

A USB port for smartphone charging is also a handy on-the-fly inclusion, although not as useful as the single component, VGA and 3.5mm inputs it sits beside.

There are three HDMI inputs, one of which is a HDMI/MHL port hidden in a not-so-secret compartment, which can accommodate ViewSonic’s optional WPG-300 dongle (£115) for streaming content from smartphones, tablets or laptops.

If you’re sat behind the projector, you don’t have to stare at cables and sockets. There’s a detachable cover, which attaches to the back and gives the chassis a sleeker look.

That lets us concentrate on viewing Tarantino’s latest splatterfest flick, The Hateful Eight. To an extent, what you see is what you get with the ViewSonic: a crisply clear, clean and, thanks to the projector’s 2200 lumens, bright picture.

In the menus there’s just the basics in the way of picture adjustment, although it does pay to tweak brightness and contrast, both of which need bumping on our sample.

The white-on-black text that denotes the narrative chapters is an immediate sign of the ViewSonic’s pleasing contrast – something that’s confirmed by the black bars sandwiching the distinctly wide (Ultra Vision 70mm-shot) picture, and then again by the sheriff’s coat against the snowy white background.

While not capable of truly dazzling whites or blacks that seep into the pitch-black walls surrounding our screen, the ViewSonic’s contrast is convincing enough to draw you in, and never makes the picture look washed out.

The same can be said for colour reproduction.

As the degenerate strangers travel through wintry Wyoming, the mahogany stagecoach and yellow drapes inside it are convincingly deep and rich, the gold décor leaping out enthusiastically against the wood.

When dealing with skin tones, it has enough shrewdness to highlight rosy red patches too so you can fully appreciate the make-up department’s efforts.

If anything, the restrained rustic hues of the Western frontier are a little over-saturated – it’s less refined and realistic than through its rival Epson EH-TW5350 projector (£600).

Jackets are generally one-toned, and the room of beards and fur clothing, and spotlights and fire that light up Minnie’s Haberdashery, don’t have quite as much variation and subtlety as its competitor.

Because it overlooks finer detail such as shading and highlights, for example, there’s a sense that the picture lacks dimension in comparison too, with winter landscapes looking a bit flat, like an oil painting hung up on a wall.

Though not offering class-leading transparency, the ViewSonic is an entertaining watch, and a good upscaler. It is stable enough to be at home with camera pans.

Less static shots, for example, close-ups of feet hurriedly dragging along the floor, carry a slight blur, but it’s not the end of the world.

The characteristic Tarantino dialogue that dominates the first two hours hardly demands more than the ViewSonic’s built-in 10W speakers are capable of.

Whether you’re sat in front of behind the projector, voices sound clear and can be heard from across a large room.

While there isn’t much difference between the three audio modes, ‘standard’ is our pick, edging ahead with the best balance. We’d be wary about pushing it to its highest volume, though, as that’s where a slight hardness creeps in.

But as the violence ramps up in the final chapters, it doesn’t have the punch and solidity to do justice to the gun shots, which sound more like glass cracking.

Nor does it have the dynamics or bass depth for you to truly value the impact of Ennio Morricone’s sinister soundtrack. But that’s where a soundbar or, better still, a surround sound package comes in.

For general dialogue-heavy TV-watching, it’s a reasonable ‘make do’ option.

In the face of new and exciting panel technology (4K, HDR, Dolby Vision), writing off the trusty budget Full HD projector, especially this solid-performing ViewSonic LightStream Pro7827HD, would be a mistake.

Yes, there are rivals – such as the Epson – that have a more subtle hand.

But if you want big screen entertainment without having to spend a pretty penny on a projector, you won’t go far wrong by making this ViewSonic the centrepiece of your home cinema system.

See all our ViewSonic reviews