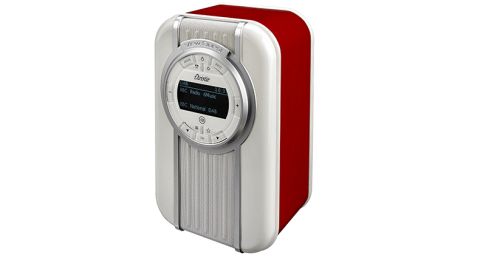 You’re not short of choice when it comes to selecting a cute little radio for the kitchen, bedroom or wherever.

But while the majority of the ‘affordable modern-retro’ sales action has lately been vacuumed up by the likes of Pure, Revo and Roberts, the new View Quest Christie wants to muscle in on the action.

There’s no denying the appeal of the Christie when it’s first sprung from its packaging – that fascia is your actual enamel on a pressed-steel plate, and the faux-leather wrap is available in no fewer than 11 colours. It’s like a miniature high-tech Aga.

It’s a neat little device, finished well. Our only qualitative reservation concerns one of the Christie’s authentic USPs: its ability to work in both ‘portrait’ and ‘landscape’. That 2.4in LCD display (crisp, adjustable for brightness and full of information, if a trifle small and tricky to read from distance) and the bezel it sits in rotate through 90 degrees so the Christie can stand up or lie down.

It’s a far from smooth action, though, and while we haven’t tested the mechanism to destruction we wouldn’t be happy constantly sliding it back and forth.

Elsewhere, specification is as it should be for a product of this type and price. There’s DAB, DAB+ (for optimists) and FM radio reception, Bluetooth connectivity and NFC pairing. Other sources are catered for by a 3.5mm input on the back panel.

That’s accompanied by a USB socket (for charging only) and a 3.5mm headphone output. There’s also a compartment for the optional battery pack (the battery is part of an ‘accessory pack’ that includes a faux-leather carry-case. It sells for around £30).

The Christie proves a tenacious, grippy tuner for both DAB and FM radio, and thanks to its 30-station memory you should never be more than a button-press or two away from entertainment. Considering its diminutive size the Christie’s quite an expansive listen, the BBC’s 6Music projecting well beyond the confines of the cabinet.

With 10 watts of power serving a single 3in driver it’s not going to fill a bigger room with sound, but it handles the dynamics of a reasonable-quality Radio 3 broadcast in decent style.

Tonally it’s a rather more qualified success. It’s nicely communicative through the midrange, but with radio broadcasts of any standard it has a rather grainy, spiky approach to the top of the frequency range that all too easily manifests itself as sibilance, while at the bottom it’s too tentative.

The Christie is a better-balanced listen when fed a Bluetooth signal, though, which makes us doubt the absolute fidelity of its radio tuners.

Quickly paired via NFC and fed a smartphone-borne file of The Shins’ So Says I the Christie brings a little more low-frequency body to the tune than it can muster when functioning as a radio, and while treble frequencies are still on a knife-edge they’re less inclined to grate.

Having said that, a listen to The Upsetters’ Super Ape confirms the View Quest really isn’t inclined to give bass the billing it sometimes requires.

Overall, the Christie is a capable, likeable product that’s not balanced enough a listen to warrant the full five stars.

If you’re seduced by the looks, though (and we imagine plenty of people will be), that may be a trade-off you’re willing to make.