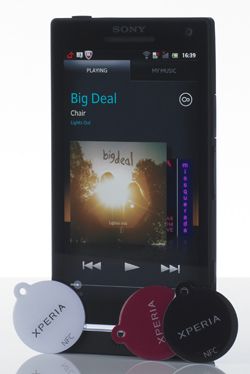 Fine video performance, spec and features; it's easy to recommend the Xperia S

Almost every smartphone review seems to begin “for those who don’t want an iPhone…” – the Sony Xperia S is different, requiring no excuses when compared with Apple’s overlord of mobiles.

This is a phone for those who desire a usable, brilliantly adaptable and competitive smartphone, full stop – and that's despite only running the 2.3 'Gingerbread' version of Google's Android operating system, with the update to Android 4.0, or 'Ice Cream Sandwich', not planned until the second half of this year.

This is a relatively chunky (128 x 64 x 11mm), square-edged phone, with a mildly textured plastic shroud and with a pleasing (to our eyes, anyway) design flourish in the clear, illuminated slice of Perspex running through it.

This incorporates the icons for the hottest keys (‘home’, ‘menu’ and ‘back’), but there are no physical buttons on the fascia – everything is touch-sensitive.

In fact, the most prominent physical control on the entire handset is the ringer/media volume control high up on a side-panel.

There’s also a camera button – the Sony’s ready to shoot within a second of this being pressed, regardless of what it was doing beforehand – , an HDMI AV output and a USB for charging.

However, for all the slick touch-control stuff on the business end of the Sony, the back of the phone's only worth mentioning because it’s of slightly creaky plastic. It feels feels a bit on the cheap side compared to the bank-vault build of the Apple iPhone 4S.

Where the Sony scores comprehensively is on the quality of its screen.

It’s a 4.3in HD affair – its resolution of 1280 x 720 would have been commendable on a full-size TV not that long ago – and it’s bright, detailed and colourful, meaning video content looks superb.

We loaded the Xperia S with some high-definition live footage of J. Period and Black Thought performing at the Toronto Manifesto Festival, along with a clip from Cloudy With A Chance Of Meatballs, and in landscape format the screen's plenty big enough to be watchable, and the pictures it delivers loaded with detail.

It follows that, when given something entirely less challenging to do (like display some static ‘menu’ icons) the screen is as crisply legible as that on any smartphone we’ve seen. And the Sony’s ability to stream video wirelessly to your DLNA-enabled TV at the push of a single button is equally pleasing.

Then, of course, there’s the Sony’s camera. At 12.1 megapixels it’s of greater resolution than any number of point’n’shoot cameras on the market right now, and sure enough it takes still pictures and video of impeccable quality.

There's superb detail, and images remain stable and composed even when you’re making full use of the Xperia S’s prodigious 16x digital zoom. It’s not quite a replacement for a dedicated budget camera, but by smartphone standards it’s deeply impressive.

Video shooting is also available, at full 1080p resolution, and the Sony’s very efficient at minimising wobble when doing it.

As a music device the Xperia S is, of course, at the mercy of the quality of headphones you’re wearing.

Any serious user should ditch the bundled ear-buds (not an Apple-style catastrophe, but pretty indifferent nonetheless) in favour of something worthwhile.

Consider SoundMagic’s £35 E10s as a minimum: use those and the Sony’s revealed as a perky, engaging listen.

It’s sound is detailed, powerful and spacious enough to make the use of CD-quality WAV files not just worthwhile, but advisable, Burial’s Archangel sounding punchy and atmospheric.

And should you swamp the phone's 32GB internal memory with content, the newly secure Music Unlimited app (which replaces the not-secure-at-all Qriocity) offers a bit of Spotify-style on-demand streaming from a pretty impressive library.

Elsewhere, the Sony’s never less than competitive. Yes, you can sense the operating system working hard at times (the promised upgrade can only help that). And yes, the backlighting is more intrusive when scrolling menus and what-have-you than it ever is when viewing video content.

However, those considerations apart but this is capable performer, its dual-core configuration more than up to multi-tasking without tears.

And the battery? Pretty much par for the smartphone course: it requires daily charging, but as long as you’re not using all the power-hungry functions at once it shouldn't need any more than that.

Abilities as a phone

As a telephone, the Sony is more than adequate: it holds on to marginal signal-strength tenaciously, and call quality is generally crisp and low-noise. Even better – and this isn't the case with all smartphones – you can hold the Sony in a natural-feeling way and not interfere with performance.

And if you want to do the full Dick Tracy, Sony will even sell you a matching SmartWatch for around £100 or so. This links to the Xperia S (or indeed other Xperia phones) via Bluetooth, and lets you control calls, music, and even your Twitter and Facebook visibility, while the phone remains in your pocket.

But the Sony has another neat trick: four little coloured dog-tags using Near-Field Communication to launch functions on the phone. With these set up, having your Xperia S close to a specific Smart Tag will activate a pre-programmed profile of settings.

So you could have a profile for your phone when you're using it in the car, for example connecting the phone automatically to the Bluetooth hands-free system and firing up navigation.

Keep that Smart Tag in the car, and you're sorted.

Or, as another example, you could have a separate profile for night-time use, switching the phone into silent mode so it doesn't wake you up every time you get a message.

Tags can be programmed via the phone's menu system, so you can customise the functionality to suit your needs. Once programmed, the tags – which use the same technology planned to offer simple payment for products and services from your phone – need no power, so can be left wherever you want to fire up one of those profiles.

Put all of the above together, and you have a great phone that's only going to get better. The Sony Xperia S has serious smartphone appeal – and not just to those who don’t want an iPhone.