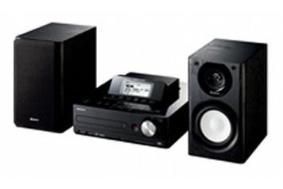 Although a stunner on paper, the Sony’s a bit of a disappointment in real-life

The point of a micro is generally to offer an entire, do-it-all system from a compact package, and while many products achieve this to one extent or another, Sony's taken it a step further.

The NAS-E300HD has an 80GB hard disk that you can fill with music, either by ripping from CD, importing from a USB drive, or by recording from the DAB radio.

Sounds pretty awesome, doesn't it? Especially given the £230 price tag, which includes speakers and an iPod dock.

Heavily compressed music files
However, look beyond the headlines and the details prove something of a let-down. For a start, although ripping a CD is an absolute, one-button-press, doddle, the resulting music files are heavily compressed 128kbps MP3s.

What's more, the Gracenote database that's built-in to the machine is from October 2008, which means any CD released after that is going to be played and ripped without track info.

There's no internet connection, so if you want ID tags you have to input them manually (a pain on the limited remote control) or go through a back-and-forth process between the micro and your PC (no Mac compatibility here) with a USB stick.

Even then, you can't simply install the latest version of Gracenote. Instead you have to go through the whole process every time you add new, unrecognised music.

Sadly, there's no lossless
Ironically, this means its actually more efficient to simply rip your CDs using your computer, then transfer them to the Sony via USB stick, but even then you're limited to just the MP3, AAC and WMA formats. That's right, this 80GB HDD is a lossless-free zone.

The Sony's USP is something of a letdown, but at least it sounds reasonable. Play Fleetwood Mac's The Chain from CD and a nice openness and clarity to the midrange makes the most of the multi-layered vocals.

Keep the speakers close to a back wall and there are decent amounts of bass, and while treble is a little forward in the mix, it's not harsh.

Switch to a rip of Idlewild's raucous Readers & Writers and it's more congested than the disc original, but the gap isn't as wide as it should be, indicating a lack of transparency from the unit.

We're not going to be overly harsh, though: it might not sound great, but the Sony is perfectly listenable, and for a product like this, at this price, that's fairly impressive in itself.