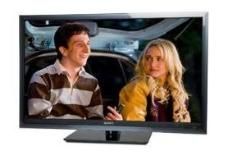 Take the usual Sony quality, add even backlighting, and you've got a brilliant, all-round TV

'What's that? A big Sony without backlight issues?' we hear you cry. But lo and behold, it is true – the KDL-46Z5500 we tested is free from the clouding that's plagued almost all the other sets we've seen from the company this year. With that problem off the menu, we're free to wax lyrical about this set's many virtues.

Motion processing can't be topped
The most virtuous of those virtues is motion. Simply put, Sony is the only manufacturer out there to have properly nailed motion processing with its Motionflow technology, and as this is a range-topping Z-series TV, it gets the 200Hz version.

Whether you're taking-in the slow pans of 3:10 to Yuma's scenery shots or the fast-paced kung-fu of The Matrix, the Sony tracks every detail and edge in precise, smooth and solid fashion.

And it successfully avoids the weirdness that most other motion processors produce, so even those who are most sensitive to 'enhanced' motion should be able to benefit.

In other ways, the Sony is very like the Samsung UE46B8000. Detail levels are very similar, with the faces of 3:10 to Yuma's craggy characters appearing similarly lined and weather-worn on both sets.

Plenty of punch to the picture
The Sony doesn't quite have the black levels of the Samsung, which also has mildly more insight, and is just a touch more pale in its colour balance. However, the Sony counters this with a touch more punch.

It's very much a swings-and-roundabouts affair with Blu-ray, then, and if anything they're closer with DVD. How to Lose Friends and Alienate People looks so similar on these two sets that if you were told they were made by the same company, you'd likely believe it.

Obviously that means detail levels are very high, colours are controlled, and edges are well-defined and stable.

There are qualitative differences in the Freeview tuner and audio performance, though. The Sony's tuner is detailed and vibrant, but lacks a little of the control and cleanliness of the Samsung's, while its sound is more full-bodied, yet somehow less direct.

We would recommend taking a look at the '46Z5500 before you buy, just to make sure that, like our test sample, it's free from backlight issues. If it is, you can rest assured that this is one of the best tellies available at this size.